The State Department official who sent the first known email acknowledging the existence of Hillary Clinton’s private email server now says he doesn’t remember how or when he first learned about the former secretary of state’s use of the device.

Stephen Mull, who served as executive secretary at the State Department during the bulk of Clinton’s tenure, offered his hazy recollections on Friday in a deposition with attorneys from Judicial Watch.

A federal judge granted the watchdog group permission to depose Mull and other current and former State Department officials concerning the creation of Clinton’s email system and about how the agency responded to Freedom of Information Act requests.

“Do you know how you learned [about Clinton’s server]?” Judicial Watch attorney Michael Bekesha asked Mull.

“I can’t recall, no,” Mulls responded.

“Do you recall when you learned that?” came the follow-up question.

“No. I can’t recall,” said Mull, who now serves as the Obama administration’s coordinator of the Iran nuclear deal implementation. 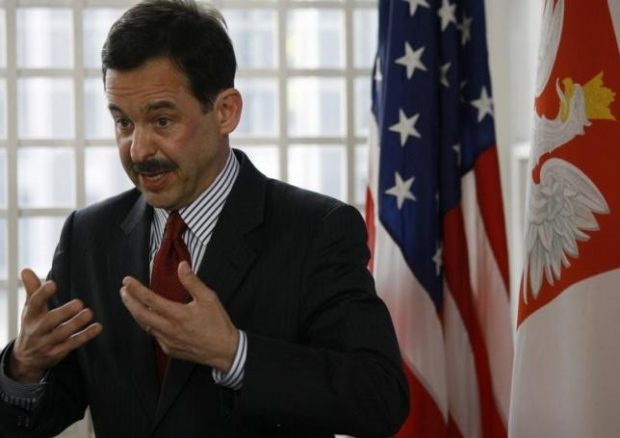 Stephen Mull, acting assistant secretary for political-military affairs U.S. Department of State, gestures during a news conference at the U.S. Embassy in Warsaw May 7, 2008. REUTERS/Kacper Pempel

That line of questioning was spurred by an Aug. 30, 2011 email chain — first reported by The Daily Caller in January — which shows that Mull brought up Clinton’s server in an exchange with Clinton aides Cheryl Mills, Huma Abedin, and Monica Hanley. Patrick Kennedy, the State Department’s under secretary for management, was also on the email chain. (RELATED: Emails: Clinton Aides Resisted State Department Suggestion That Clinton Use State.gov Account)

In it, Mull thanked Mills “for alerting me to the communications issues the Secretary has been having.”

“We are working to provide the Secretary per her request a Department issued Blackberry to replace her personal unit which is malfunctioning,” wrote Mull, who noted that the personal digital assistant was malfunctioning “possibly because of [sic] her personal email server is down.”

Mull offered to provide Clinton with two BlackBerries, one of which would include “an operating State Department email account.”

At that time Clinton was using a personal BlackBerry to send and receive personal and work-related emails. She continued to do so throughout the rest of her State Department tenure.

Mull also wrote that the BlackBerry email account “would mask her identity” but “would also be subject to FOIA requests.”

Mull is key to determining how, when and under what circumstances State Department officials outside of Clinton’s inner circle learned about her private email system. The agency’s inspector general released a scathing report last month noting that Clinton did not seek approval of the system. Had she attempted to do so, the agency’s bureau of diplomatic security would have rejected the request because it was not secure, the IG found.

In his deposition with Judicial Watch, Mull said he did not recall the Aug. 2011 email exchange. He said he was reminded of it by a report in the Washington Post. The paper reported on the email in March, a couple of months after The Daily Caller’s initial report on the emails, which were obtained through a Freedom of Information Act lawsuit.

Mull said that he found his mention in the press “interesting.” Asked why, he responded: “Well, I think whenever something appears in The Washington Post with your name on it, by its nature is interesting.”

Regarding his specific statement in the email that Clinton’s identity would be masked, Mull told Judicial Watch’s lawyers that “it would have been to ensure that it was clear that Secretary Clinton’s name would not appear on the State Department’s directory.”

Mull also said that he did not recall Abedin responding that Clinton’s use of a BlackBerry didn’t “make sense.”

He did write back, however.

“Thanks for reminding all of this very helpful context,” he told her at the time.

Mull’s deposition is the third that Judicial Watch has conducted as part of its lawsuit. The watchdog has deposed State Department official Lewis Lukens and Clinton’s chief of staff, Cheryl Mills. Bryan Pagliano, the State Department information technology specialist who set up and managed Clinton’s server, has said he will plead the Fifth in his deposition.

Judicial Watch will depose Abedin and Patrick Kennedy, the under secretary for management, at the end of the month.