I thought the most alarming part of this episode was going to be that the writers decided to skip the theme song. It sets a very particular tone for this show — as themes do for any show, really — that it was bound to jolt the audience. 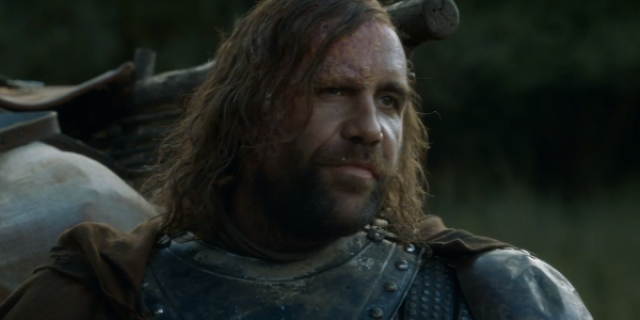 But I wasn’t prepared for what was actually coming next. These random mountain folk, who later appear seemingly religious, were building some kind of structure. And who do we close in on helping out in the process? THE HOUND. Remember him? He who fought Brienne and who Arya left for dead? Well, not so dead after all.

Elsewhere on the canvas, Margaery falls deeper in cahoots with the High Sparrow, though struts her long-game attitude. Olenna tries talking Margaery into returning to Highgarden; her “Oh, this is madness” re: the nun accompanying them was my first chuckle of the episode. As for the long game: Margaery locks eyes with her grandmother and slips her a piece of parchment, confirming her allegiance.

With her swag back, so to speak, Olenna has no time for new friends even in the most tumultuous of times. Take Cersei suggesting the two stick together. “We need each other,” she pleads. But Olenna fires back, “I wonder if you’re the worst person I’ve ever met.” Ouch, girl. A) you can’t really come back from that b) blood is thicker than water c) Diana Rigg is the most important actress on this show.

Cersei’s brother Jaime isn’t having much luck either, as his quest to conquer a Frey castle hits a roadblock in the Blackfish (Catelyn’s uncle). Also, hey again Edmure.

Tully in-laws the Starks, or what’s left of them in Jon Snow and Sansa, try to muster support for an army. With Ser Davos’s help, they manage to secure 62 Mormont men — with the fierce, approximately 10-year-old Lyanna Mormont’s approval. She and Arya should really team up and be a tiny, unstoppable duo. After failing to recruit House Glover and seeing what they’re prepared to fight with, Sansa writes a letter (to Littlefinger?), presumably asking for reinforcements. Literally, rein”force”ments.

Line of the night goes to Yara, who takes Theon to a bar/brothel of sorts and tries to cheer him up. “I know you’ve had some bad years,” she says (aka the understatement of the year, for any character ever). But he’s set to be there for her, even though he has to stew in his lack of manhood below the belt while his sister gets to enjoy herself.

And just when it finally looks like Arya’s escape plan is going to work, a woman (who turns out to be that faceless girl in disguise) stabs (!!) Arya several times. Arya falls into the ocean, but manages to scurry out of and walk about the town, though her fate remains unclear. She has to be fine, right?!

All this, plus: The Hound can’t catch a break. Those people who took him in? Murdered, most likely by three vagabonds on horses who stopped by asking for food earlier during a group meeting. But it’s those three who should be worried. Upon the discovery of his murdered people, The Hound grabs an ax. And scene.

Only three episodes left until the season finale … and it can only get more intense from here. But please don’t delay the theme song again, no matter what surprises await.