The Arya scenes of Sunday’s “Game of Thrones” episode, “The Broken Man,” didn’t make any sense. Arya Stark has spent years on the run, seen repeated betrayals, come close to death countless times, and now she’s defected from an order of shapeshifting super-assassins who have explicitly warned they will kill her if she leaves.

So what does she do in Sunday’s episode? She strolls around in broad daylight, slings a mountain of silver to buy passage on a boat, and then just sits on a bridge gazing wistfully into the distance as if she isn’t being hunted down to be killed.

And she pays for it, as the Waif, who has spent the better part of two seasons actively hating her, approaches in the guise of an old woman and stabs her a bunch of times right in the gut. Despite her gruesome wounds, Arya escapes by jumping into a canal, and is then seen wandering the streets of Braavos, bleeding like a stuck pig. 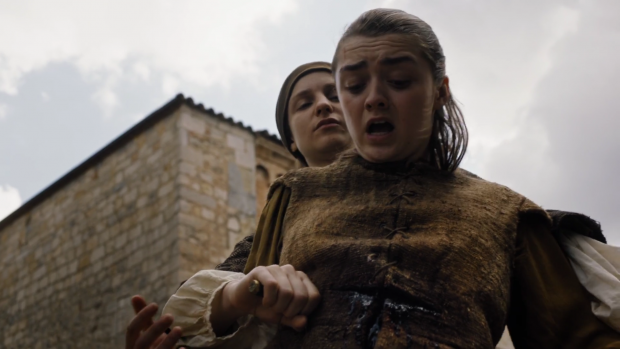 So, uh, what the hell? Did Arya’s season and a half of deadly assassin training never happen? Why is she suddenly so incompetent?

Sure, it could just be a case of showrunners David Benioff and D.B. Weiss making the show crummier now that they’re out of George R. R. Martin material to adapt. But some fans are instead pushing a couple of totally insane yet remarkably plausible theories to explain what’s happening in Arya’s plotline.

The Game of Thrones page on Reddit is a major hub for speculation by obsessive fans of the show, and they quickly observed how Arya’s unfortunate stabbing incident made no sense. So many of them are pushing a wild new theory: It wasn’t Arya on the bridge, but instead Jaqen H’ghar, the man who has been leading her training in Braavos. 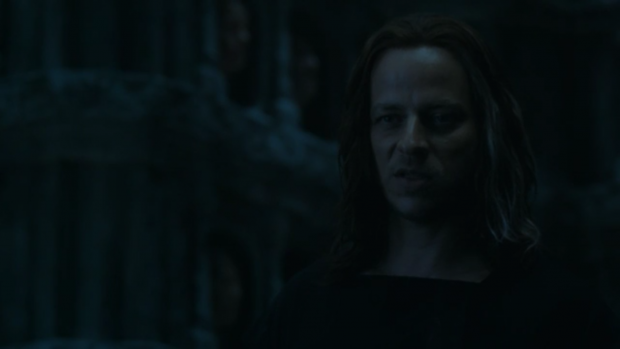 It’s not as impossible as it seems. As a Faceless Man, Jaqen has the power to change his appearance at will, and the scene where Arya is blinded in Season 5 shows it’s possible for Faceless Men to imitate Arya’s appearance. 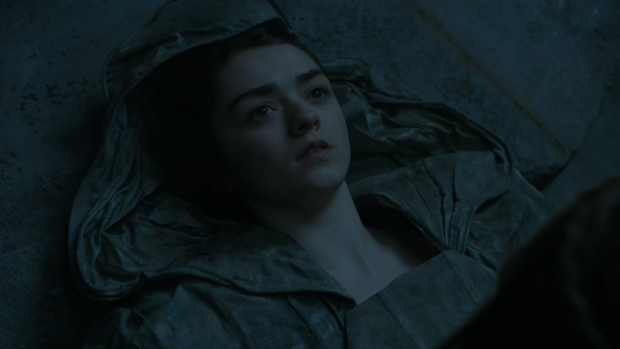 A man has many talents. [HBOGo screengrab]

So why would Jaqen want to imitate Arya Stark, one episode after he ordered the Waif to kill her?

A leading theory is that Jaqen’s order isn’t simply about killing Arya, it’s also a test for the Waif. When sending her to kill Arya, Jaqen ordered the Waif not to let her suffer. Yet when the attack came in Sunday’s episode, the Waif inflicted a series of painful, bloody, yet apparently non-lethal injuries. The Waif, in her hatred, has apparently failed the test that was given her, which could have deadly consequences for her.

One of the biggest pieces of evidence for this theory is what’s missing from the scene: Needle, the sword Arya received from Jon Snow, which she retrieved from its hiding place at the conclusion of last episode. It would be bizarre for Arya to hide the sword again right after retrieving it, when she knows she’s being actively hunted. 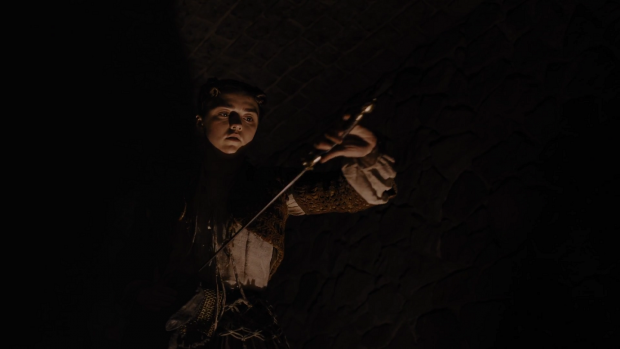 Others say that Arya’s cheerful, aloof demeanor throughout the scene was simply a different look from what she should be sporting, suggesting the whole sequence was an act by Jaqen.

Another user noticed that the music that plays as Arya walks into the bridge where she is stabbed is Valar Morghulis, the theme of the Faceless Men that plays in many scenes featuring Jaqen.

Of course, there’s ample reason to question the theory. Did Arya know about this plan? If so, why is Jaqen helping Arya after she apparently betrayed the order? Was her entire betrayal of the Faceless Men planned? If Jaqen was just faking as Arya, why is he still staggering down the street near death at the end of the episode?

Another totally different theory, which has been circulating for a while, is that almost all of Arya’s scenes are not what they seem. When Arya is being trained and tormented by the Waif, the theory goes, she is actually battling against herself. Yep, just like in Fight Club.

This theory was also started on Reddit, by the user catNamedStupidity. The idea is that as Arya trains to be a Faceless Man, the Waif represents her desire to become No One, while Arya Stark represents her continued will to be Arya and to get vengeance for the wrongs done to her family. The Waif’s hatred of Arya is understandable, because she wants to destroy the personality of Arya to allow her to truly become No One (which happens to be the title of next week’s episode!).

The show has offered a few morsels to bolster this theory. Earlier this season, the Waif gave Arya a brutal public beatdown, yet nobody nearby seems to even notice. Not only that, but later in the scene, the camera zooms out to show Arya swinging her stick around at… nobody. 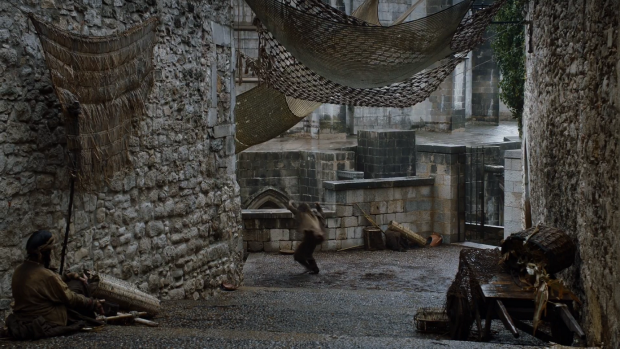 Arya swinging at the Waif…or at No One? [HBOGo screengrab]

The split persona theory would also explain how the Waif seems to always know when Arya is lying or telling half-truths. If the Waif is inside Arya’s head, this would be very easy.

Sunday’s episode does nothing to eliminate this theory. The Waif’s gruesome but incomplete attack on Arya would represent the continued battle in Arya’s mind.

Of course, this theory also raises questions. Who was training Arya to fight, when so many scenes are just her fighting the Waif? Also, wouldn’t it be pretty stupid for “Game of Thrones” to so closely imitate a ’90s movie?

Needless to say, not all theories can be right. Last month’s fad theory that Hodor was a horse looks pretty silly in hindsight. On the plus side, we’ll probably learn the final answer by the end of next week.

1
Here's How Dem Candidates Who Supported Ocasio-Cortez's Green New Deal Are Faring In The Primaries
Elections
2
Farrakhan Accuses Fauci And Bill Gates Of Plotting To 'Depopulate The Earth' With Coronavirus Vaccine
US
3
'It's Over': Atlanta Mayor Says Protesters Should Clear Out After 8-Year-Old Girl Shot And Killed
US
4
Mollie Hemingway: Media Has 'Overstated Their Confidence' In Mask-Wearing, Using It As 'Political Cudgel'
Media
5
Black Lives Matter Totally Shuts Down Nation’s Capital On Independence Day
US