Rape gets high marks in BuzzFeed‘s book. Or so it seems.

While the site gave presumptive GOP nominee Donald Trump the shaft on RNC ads because they say he’s like a “cigarette” and harmful to their health, BuzzFeed Editor-in-Chief Ben Smith bragged that their Stanford rape story really hit the sweet spot. 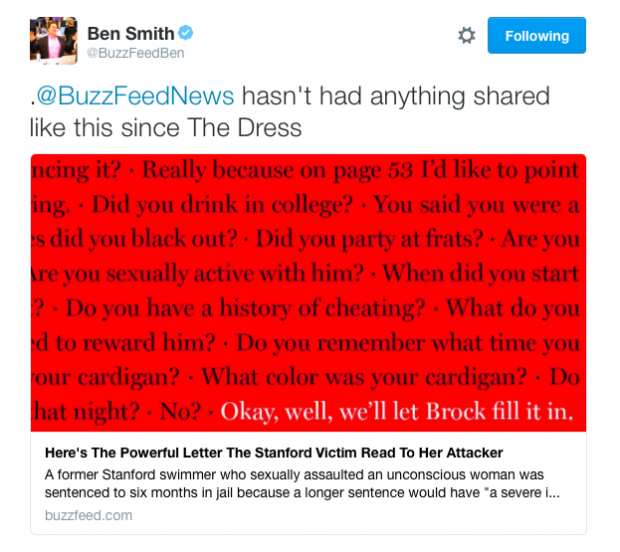 For those who don’t know, the rape story is the one in which a woman raped by a former swimmer at Stanford while she lay unconscious after a night of partying. The story gained major traction on Monday after CNN’s Ashleigh Banfield read the letter from the rape victim aloud on her program — a letter that was first published Friday on BuzzFeed.

Meanwhile…”The Dress” is a heavily clicked feature BuzzFeed ran in February, 2015 in which readers were asked to decide whether a dress was blue and black or white and gold. Weirdly, humans saw each and BOOM: big traffic.

On Tuesday, there was turbulence. Some on Twitter reacted harshly to Smith’s bragging with at least one reader calling him “human trash fire.”

Beejoli Shah, a rape survivor who had her own story published on BuzzFeed in 2014, remarked, “This is a bad priority to share from an org that hasn’t always handled survivor stories, including my own, well.” She explained, “I had a really, really caring and trusting editor on my piece itself, but the subsequent edits BF made after the fact led to SO many issues.”

She added, “When @BuzzFeedBen (who I respect a LOT) equates the the Stanford letter to a viral dress, it makes me question priorities of BF editors.”

Smith replied to a woman who said the author was “elated” that 7 million people read her story. “This just seems like such a positive thing,” he wrote.

Beejoli tried to school Smith, saying, “They’re shading you guys for trying to celebrate your own virality, instead of letting that # be news on its own.”