Newly released State Department emails show that in the days after Hillary Clinton’s exclusive personal email use made international news, officials with the agency’s legal department were urged by the former head of that division to make it clear that the bureau did not sign off on the former secretary of state’s arrangement.

But that advice, which came from John Bellinger, the State Department’s Legal Adviser during the George W. Bush administration, appears to have gone unheeded, at least publicly. The State Department never publicly clarified that Clinton self-approved her personal email system.

[dcquiz] While the agency’s information technology, diplomatic security and legal adviser divisions were not made aware of the setup, those facts only came to light in an inspector general’s report that was published last month.

In delaying saying whether Clinton’s email system was approved by the State Department, the agency created the perception that the Democratic presidential candidate’s email system was allowed. Clinton herself has made the same claim. The IG report thoroughly debunked that notion, however.

He took issue with Harf’s implication that the office of the legal adviser signed off on Clinton’s email system and that her email practices were similar to past secretaries of state Condoleezza Rice and Colin Powell.

“I’m sorry you guys are getting put through the wringer today,” Bellinger wrote in his first email, which The Daily Caller received as part of a Freedom of Information Act lawsuit against the State Department.

The watchdog group Cause of Action filed the suit on TheDC’s behalf.

“Please make sure that Marcie [sic] Harf doesn’t keep saying that Secretary Rice did the same thing. As you know, that is not correct, and Secretary Rice has corrected the record,” wrote Bellinger, who continues to serve as Rice’s personal counsel.

During her March 3 daily press briefing Harf defended Clinton’s email arrangement saying that she “was following what had been the practice of previous secretaries.”

The implication was that Clinton’s immediate predecessors, Rice and Powell, used email in the same way Clinton did. Harf did clarify later that Rice did not use personal email while Powell sometimes did.

Bellinger also bristled at the implication that the office of the legal adviser had approved of Clinton’s foolhardy setup.

“I’m getting calls from people (press and former USG lawyers) asking whether State lawyers actually approved letting Secretary Clinton use a State [BlackBerry] for official business using a personal email account, and then to keep the emails,” he continued.

“Marcie [sic] Harf is implying that State approved this practice (and this suggests that L approved it, though she didn’t say so specifically). As someone who wants to defend L’s reputation, I would urge you to defend the credibility of L as good and careful administrative lawyers, and don’t let the spokesman give L a bad name. I can’t believe that L would have approved this, and you shouldn’t let Marcie Harf imply that you did.”

“L” refers to the State Department’s Office of the Legal Adviser which, according to its website, “furnishes advice on all legal issues, domestic and international, arising in the course of the Department’s work.” 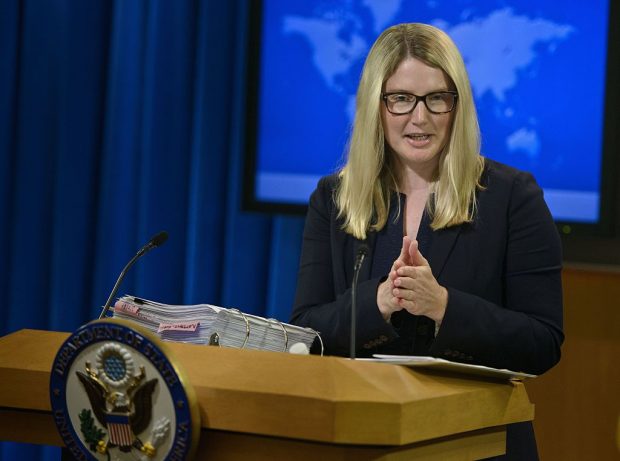 The emails were released to TheDC just as the State Department’s press shop is facing intense scrutiny after spokesman John Kirby admitted that an agency official ordered the excision of eight minutes of video from a Dec. 2, 2013 press briefing discussing nuclear negotiations between the U.S. and Iran.

The State Department has refused to conduct a detailed investigation of the matter, leaving the identity of the official who ordered the deletion to remain a mystery.

As the two top agency spokeswomen at the time, Harf and her colleague Jen Psaki have been suggested as being behind the order. Both have denied any involvement in the deletion.

Visek responded to Bellinger’s advice, writing: “Thanks for the heads up. I’ll reach out to PA and try to make sure they understand.”

“PA” is a reference to the bureau of public affairs.

“Marcie [sic] hasn’t specifically said that L approved the practice, but she’s strongly suggested that it’s all fine which is why people are calling me to ask ‘Did L really approve this’? And I have responded, I can’t believe they did — they are careful lawyers,” Bellinger wrote back.

In those initial days after Clinton’s email practices were revealed, Harf and her fellow spokeswoman Jen Psaki led a clear-cut effort to downplay the burgeoning scandal.

At one point during the March 3, 2015 daily press briefing, Harf, who now serves as senior advisor for communications for Sec. of State John Kerry, exclaimed that “I was a little surprised — although maybe I shouldn’t have been — by some of the breathless reporting coming out last night.”

She came under criticism from many in the press for her dismissive responses to questions about the email setup. 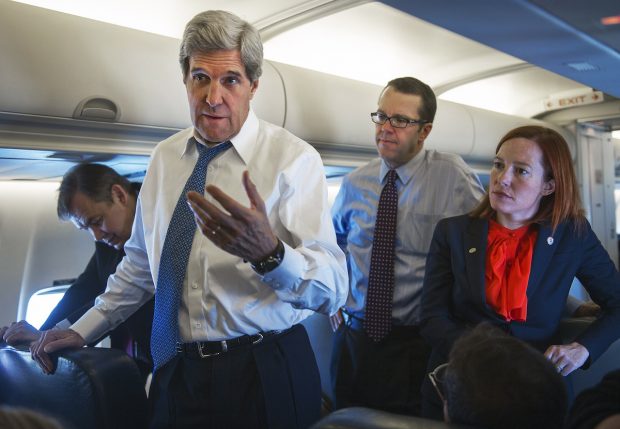 Jen Psaki stands behind Secretary of State John Kerry as he talks with reporters aboard his government aircraft shortly after departing Seoul Air Base April 13, 2013, for Beijing, China. (REUTERS/Paul J. Richards/Pool)

State Department officials declined for months to answer questions about who may have approved Clinton’s email setup.

The arrangement was managed by Bryan Pagliano, who was hired by the State Department as an information technology specialist in May 2009.

The watchdog found that Clinton did not seek approval for the system from anyone at the department. The report also noted that officials with the Bureau of Diplomatic Security would not have okayed the system even if Clinton had asked for permission to use it.

The office of the legal adviser also had no input on the system. The report did note, however, that a State Department official named John Bentel told two information technology staffers not to ask questions about Clinton’s server. He allegedly told the staffers that the legal adviser had approved the system.

Reached by email for comment, Bellinger said he would let his emails speak for themselves.