Witnesses at a Senate hearing Wednesday shot down the idea that there is a shortage of low-skill and unskilled American workers that need to be filled by guest-workers, arguing that the program lowers wages and hurts Americans.

“There is absolutely no evidence that we have a shortage of workers to do the kinds of jobs typically done by H-2B workers. Real wages for less-educated Americans show stagnation or decline,” Steven Camarota, of the Center for Immigration Studies, testified in front of the Senate subcommittee on Immigration and The National Interest.

He added, “Analysis by occupation of the kinds of jobs done by H-2B workers also shows little to no wage growth or outright decline. If there was a shortage of such workers, as proponents of the program argue, wages should be rising rapidly as desperate employers bid up wages.”

The H-2B program was created for American employers to hire temporary foreign labor when U.S workers are unavailable. According to the language of the statute, it is to be used “if unemployed persons capable of performing such service or labor cannot be found in this country.”

However, according to testimony from Daniel Costa, director of immigration law and policy research at the Economic Policy Institute, there is no labor shortage in the fields in which H-2B workers are most utilized.

Looking at the top 15 career fields for H-2B visas, Costa found that these three requirements for a labor shortage are not met.

“Real wages are rising in only three of the top 15 H-2B occupations, and this rise is not significant,” Costa said. He added, “There is faster-than-average employment growth in less than half of the occupations.” 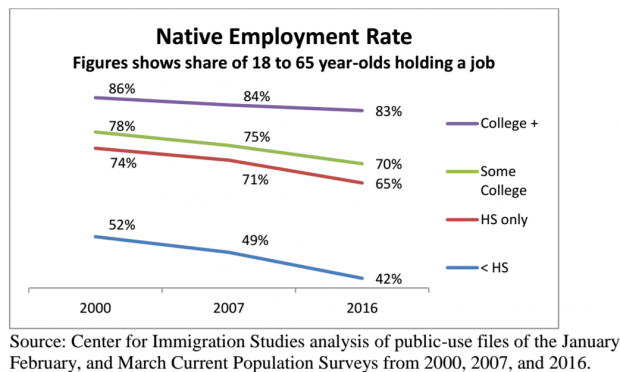 The use of H-2B visas in a markets where there is no labor shortage has in turn damaged the job prospects for native-born Americans. House Speaker Paul Ryan has argued that the H-2B program is necessary because “the work that won’t be done by people who are already here can be filled by the people who want to come here.”

However, Camarota said, “The idea that there are no Americans willing to do this kind of work is also unsupported by the data.”

“Based on the Census Bureau’s American Community Survey (ACS), there are 950,000 native-born Americans who are landscapers and grounds keepers, and they comprise three- fourths of workers in that occupation. Fifty-one percent of maids are native-born and there are 880,000 of them,” Camarota testified.

Currently, there is a cap of 66,000 H-2B visas a year, but a provision passed by Congress in 2015 has the potential to quadruple this amount. The returning worker exemption allows any person who has been employed as an H-2B in the prior three years to not be included against the cap of 66,000.

1
'This Election Is Different': Tucker Carlson And Brit Hume Discuss The Likelihood Of A 'One-Party State'
Media
2
Millions In Coronavirus Relief Loans Went To Chinese Real Estate Company At Center Of FBI Bribery Probe
US
3
The Side Of Kayleigh McEnany The Media Won’t Tell You About
Politics
4
VICTOR DAVIS HANSON: The Fragility Of The Woke
Opinion
5
6 Republican Senators Say They Will Likely Not Attend Republican National Convention
Politics