Earlier this month, America remembered the landings on five beaches in Normandy: Utah, Omaha, Gold, Juno, and Sword. The landings on those beaches, as well as the airborne drops on June 6, 1944, left 2,499 Americans dead. But the GIs triumphed, and one reason was their small arms. Here’s a quick look at some of the guns that helped the GIs crack the Atlantic Wall:

The iconic M1911 pistol had been in service for three decade when Pearl Harbor was attacked, and it became even more so after World War II. The .45 ACP gained much of its reputation for stopping power in World War II. With a seven-shot box magazine, this pistol was something American troops could rely on. Although the M9 has become the new standard-issue pistol for the U.S. Army, versions of the M1911 still soldier on with our troops. 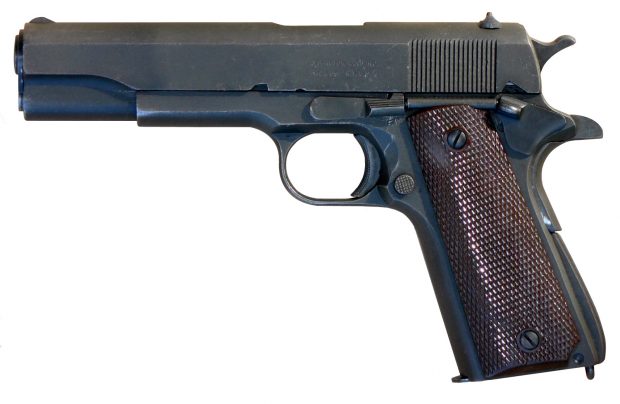 George S. Patton called the M1 Garand “the greatest implement of battle ever devised” during World War II. It was arguably the best service rifle in World War II as the other major combatants’ primary service rifles were bolt-action rifles – most of which only had five –round-magazines (the British SMLE had a ten-round magazine). The M1 Garand fired the .30-06 round, and used a unique internal magazine that held eight rounds in a metal clip. The Garand would soldier on through the Korean War and some versions even saw action in the Vietnam War!

The Garand worked well for GIs, who even took a weakness (when empty, the M1 ejected the clip that made a distinctive noise) and turned it into a nasty surprise for enemy troops. Troops at times would toss an empty M1 clip, making an enemy soldier think the GI was out of ammo. The enemy soldier would break cover – a mistake that he wouldn’t make again.

The M1 is now widely popular among civilians, and can still be acquired through the Civilian Marksmanship Program.

If the Garand got all the glory, the M1 carbine was perhaps an unsung hero for the GIs in World War II, Korea, and Vietnam. If anything, this handy little rifle gave the GIs plenty of firepower. While it fired a .30-caliber cartridge, this was a less-powerful cartridge than the .30-06 the M1 Garand used, but more powerful than a pistol round like the .45 ACP. The M1 carbine also used a detachable box magazine that held 15 or 30 rounds.

The M1 carbine became particularly popular among paratroopers, who often had a need for plenty of firepower that wasn’t too heavy to carry. The M1 carbine spawned a variant capable of select-fire, the M2 carbine, and the M3, which was equipped with a night scope. The M1 carbine has been available from the Civilian Marksmanship Program in the past, and a number of them are reportedly stuck awaiting permission for re-importation.

The standard M16A4 rifle and M4A1 carbines in service today are arguably the heirs to the M1 carbine’s legacy, and both have served today’s troops well.

While it’s best known as the “Tommy Gun,” this classic .45 ACP submachine gun had some official designations. First called the M1928 (after the year it was adopted), then the M1, the Tommy Gun gave troops plenty of firepower. The M1928 could take 20 or 30-round stick magazines, or 50 or 100-round drum magazines, the drums giving a GI with a “Tommy Gun” the ability to wipe out a squad of enemy troops. The M1 and M1A1 versions of the Tommy Gun dispensed with the drum magazines, and gave troops reliable close-in firepower.

That said, the Tommy Gun would be replaced in service by another submachine gun – one that was cheap, but very good.

What kind of gun can displace a legend? In the case of the M3, it was a very cheap one. Costing $20 to produce when it entered service in 1942 (the equivalent of $293.57 today), the M3 gave American troops a cheap .45 ACP submachine gun. Even though it had a 30-round magazine like the Thompson it replaced, troops complained about it.

Still, despite the complaints, M3s soldiered on with American troops through Korea, Vietnam, and even during Operation Desert Storm. Not bad for a $20 gun! 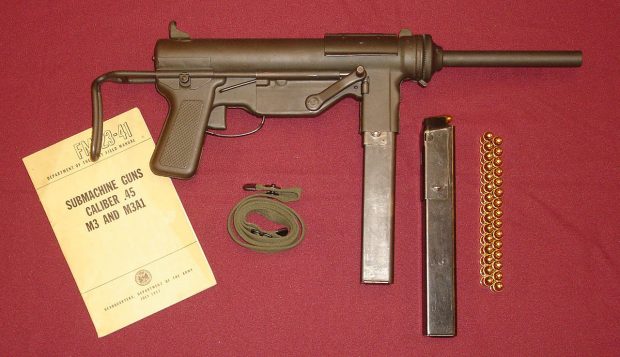 Born from the doughboys’ frustrating experience with the Chauchat machine gun in World War I, the BAR would have a 20-year journey to becoming standard issue for the Army, but the Navy bought a lot of them for their landing parties, and that meant the Marines got them, too. This select-fire rifle had a magazine that held 20 rounds of .30-06 ammo. Just what you’d need to ruin the day for some enemy troops.

Despite its lengthy journey to becoming Army standard issue, the BAR, though, quickly proved its worth in World War II. How quickly? Troops equipped with BARs were credited with shooting down some of the 29 planes the Japanese lost during the attack on Pearl Harbor. Not bad at all.

The BAR served our troops well in the Korean War and some even were used during the Vietnam War. So, a long R&D program doesn’t mean that a weapon won’t be reliable.

Today’s small arms for the troops, like the M16 rifle, the M4 carbine, the M9 pistol, the M27 automatic rifle, and the M249 squad automatic weapon, had big shoes to fill – and so far, they have made a good show for themselves.