Democratic U.S. Rep. Jan Schakowsky is raising cash for her 2016 re-election bid by promising contributors that she will pursue federal policies forcing America’s public schools to allow cross-dressing boys to use girls’ bathrooms.

“A slew of laws are making their way through Republican-controlled state legislatures limiting the rights of transgender Americans in public spaces,” Schakowsky declares, noting that the Obama administration has decreed that “schools using federal funds should allow transgender students to use bathrooms matching their gender identity.”

Asking minor children to use the bathrooms which match their biological features “is bigotry, plain and simple, and we won’t stand for it,” the suburban Chicago Democrat says.

“We need to fight prejudice in all forms,” Schakowsky adds. 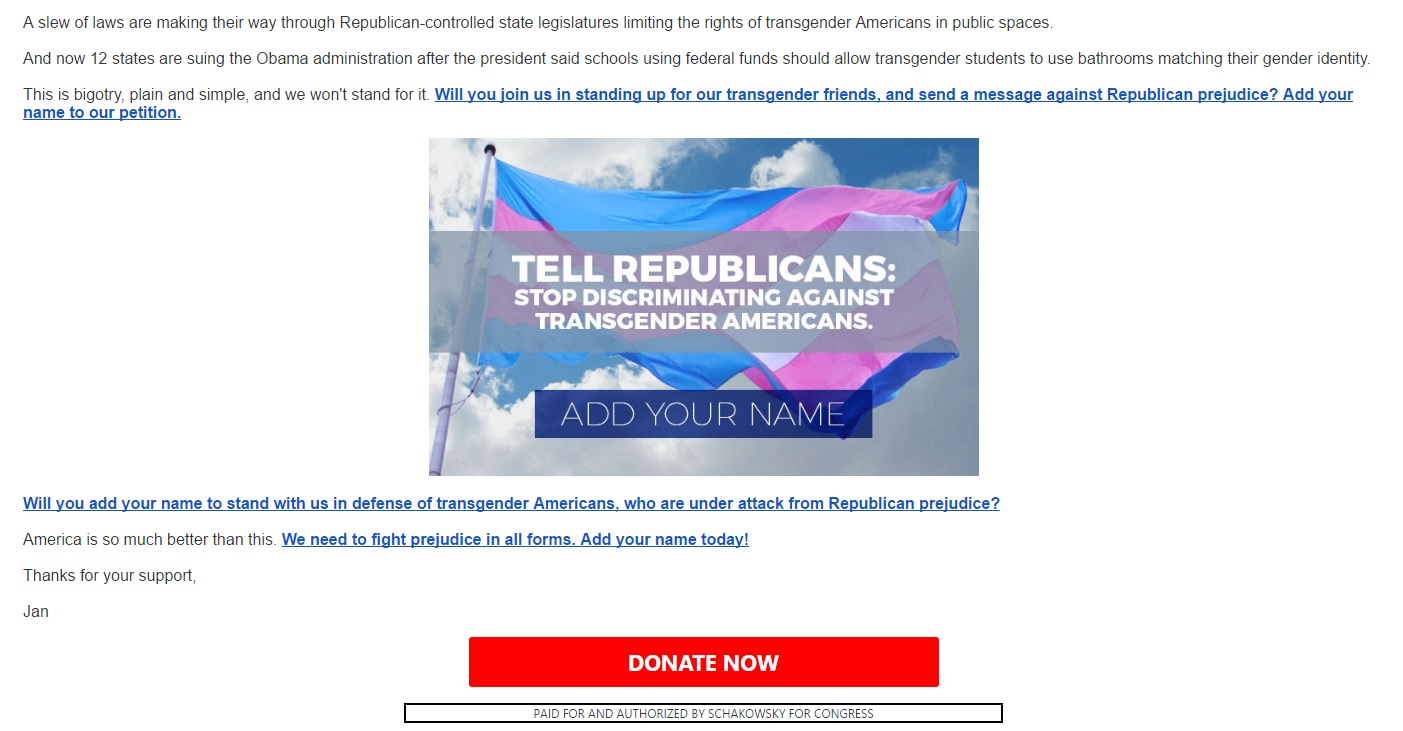 In November, the U.S. Department of Education’s Office for Civil Rights ordered a taxpayer-funded school district in the suburbs of Chicago to allow a male transgender student who dresses like a girl and otherwise identifies as female to use the girls’ locker room and shower on school premises. The school isn’t far from Schakowsky’s district. (RELATED: Feds Order High School To Allow Boys Who Dress As Girls To Use Girls’ Shower, Locker Room)

The email from Schakowsky offers three opportunities for email recipients to click on her campaign website and donate money.

Schakowsky’s current campaign committee has raised at least $858,837 in 2015 and 2016, according the Center for Responsive Politics.

A political action committee related to Schakowsky has raised $102,500.

Lawyers and law firms are Schakowsky’s biggest contributors, by industry.

The suburban Chicago Democrat has served in congressional perch since 1999.

Previously, Schakowsky has sponsored a federal bill called the Fairness in Taxation Act which would raise tax rates “for millionaires and billionaires” “to a modest top rate of 49 percent.” (RELATED: The Huffington Post Solves College Tuition Crisis: Just Make It Free!)

In November, Schakowsky co-hosted a two-hour, $2,700-per-person fundraiser for presumed Democratic presidential nominee Hillary Clinton at a swanky mansion in Evanston, Ill. (RELATED: Hillary Clinton Charges OVER A MONTH Of The Average American’s Income For Fundraiser)

For their $2,700 contributions, wealthy devotees were able to pose for a photograph with Clinton. They also enjoyed a brief reception.