From one Hillary to another (Hilary) this story is just bizarre.

Over the weekend, New York Post‘s “Page Six” wrote a semi-serious post stating that Hilary Rosen, a well-known Democratic strategist and CNN pundit in Washington, has been trying to look like the presumed Democratic presidential nominee Hillary Clinton for years. 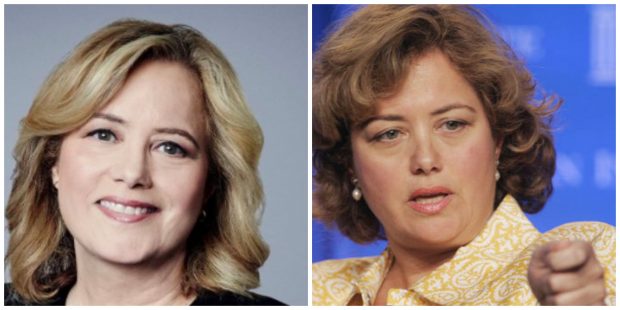 And here she is at last — Hillary Clinton’s twin!

None of which Rosen, an open lesbian, has allegedly ever done to Clinton.

Rosen, a partner with the communications firm SKDKnickerbocker, has been a vocal Hillary Clinton supporter.  She helped create Rock the Vote in 1990. She’s the former CEO of the Recording Industry of America. She co-hosts the annual famed White House Correspondents’ Dinner weekend Garden Brunch with her BFF Tammy Haddad. Sometimes she’s a safe bet for getting into the party Washington insiders are dying to attend (yes, I’m exaggerating). Other times, not. Crossing the Tamster is not her cup of tea. In 2012, she got herself in hot water when she suggested that Ann Romney (wife of Mitt) had never held a real job. “Guess what — his wife has never worked a day in her life,” she told CNN’s Anderson Cooper. The backlash was deafening. Eventually she apologized.

Asked what she thought about the NYP post, Rosen told The Mirror, “I thought it was silly. Who cares though. There are worse people to be compared to than Hillary Clinton!”

She dryly told Johnson she’s been planning her whole career around becoming a look-alike.