One of the members of the Homeland Security Advisory Council’s (HSAC) Subcommittee on Countering Violent Extremism is a 25-year-old immigrant of Syrian heritage who said that the 9/11 attacks “changed the world for good” and has consistently disparaged America, free speech and white people on social media.

Laila Alawa was one of just 15 people tapped to serve on the newly-formed HSAC Subcommittee on Countering Violent Extremism in 2015 — the same year she became an American citizen. Just last week, the subcommittee submitted a report to Department of Homeland Security Secretary Jeh Johnson, recommending that the DHS avoid using Muslim terminology like the words “sharia” and “jihad” when discussing terrorism.

In 2014, Alawa commemorated the September 11 attacks by tweeting that “9/11 changed the world for good, and there’s no other way to say it.”

Exactly a year later, she claimed that, after September 11, “Being American meant you were white.”

In April 2013, she responded to a tweet from activist Pamela Geller who called the Boston Marathon bombings “jihad” by tweeting: “go fuck yourself.”

In the Countering Violent Extremism report published last week, Alawa and her fellow subcommittee members recommended that the Department of Homeland Security “adapt to the changing nature of violent extremism itself” by devoting more attention to “anarchists, sovereign citizens, white-supremacists, and others.”

The report also recommended that, in order to combat violent extremism, the DHS “Focus on gender diversity of youth through careful attention to the range of push and pull factors that attract individuals of differing gender.”

As originally reported by The Daily Caller, the subcommittee Alawa serves on instructed the DHS to begin “using American English instead of religious, legal and cultural terms like ‘jihad,’ ‘sharia,’ ‘takfir‘ or ‘umma‘” when discussing terrorism in order to avoid offending Muslims.

Two months before Secretary Johnson created the Subcommittee on Combatting Violent Extremism, Alawa tweeted: “THE US HAS NEVER BEEN A UTOPIA UNLESS YOU WERE A STRAIGHT WHITE MALE THAT OWNED LAND. straight up period go home shut up.”

She has previously indicated her belief that only “idiots” believe that “America is the best nation in the world.”

In September 2014, a week after saying that “9/11 changed the world for  good,” Alawa said that “9/11 is your day to pull out your flag themed clothing, and my day to look behind my back as I walk home.”

Alawa is outspoken in her belief that “Islamophobic” rhetoric shouldn’t be allowed.

Less than two weeks after the Boston Bombings, Alawa tweeted: “You can’t say something intolerant and not expect consequences. Not on my watch.” In April 2015, Alawa asked: “How the hell is the shit @PamelaGeller is spewing ‘free speech’? it’s straight up warmongering hate speech. It’s xenophobia.'” 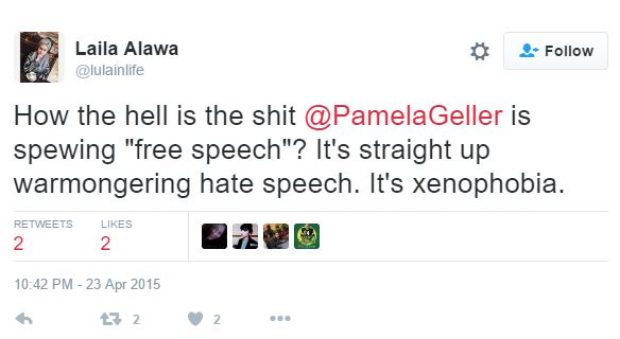 At the time, Geller (who is known as a bit of a provocateur) had recently arranged for ads in New York City with phrases such as: “Islamic-Jew hatred. It’s in the Quran.” 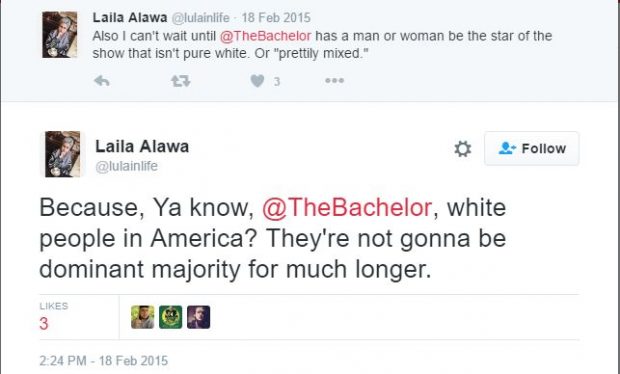 In February 2015, she claimed that she can’t wait until “The Bachelor” has a star that “isn’t pure white” because white people are “not gonna be [the] dominant majority much longer.”

Neither Alawa nor the DHS replied to TheDC’s requests for comment over Alawa’s social media activity.