In a pair of since-deleted Facebook posts, the Capitol Bureau Chief for NBC North Carolina affiliate WRAL blamed supporters of the state’s transgender bathroom bill and their “rhetoric” for the Orlando terrorist attack that left 49 people dead and 53 others wounded.

In one of the Facebook posts–both of which were captured by conservative blog The Daily Haymaker–Laura Leslie wrote: “[I]f you’re an elected official in NC offering ‘thoughts and prayers’ and ‘support’ in the wake of this horrific anti-gay crime, maybe you should think long and hard about your support of legislation that singles out LGBT people as fair game for discrimination on ‘religious freedom’ grounds. Rhetoric matters.” (RELATED: 10 Things We Know About Omar Mateen — The Orlando Shooter)

The North Carolina bill that Leslie blames for the Orlando terror attack requires people use the bathroom that corresponds with the sex on their birth certificate. (RELATED: Supreme Court May Decide Transgender Bathroom Issue Once And For All) 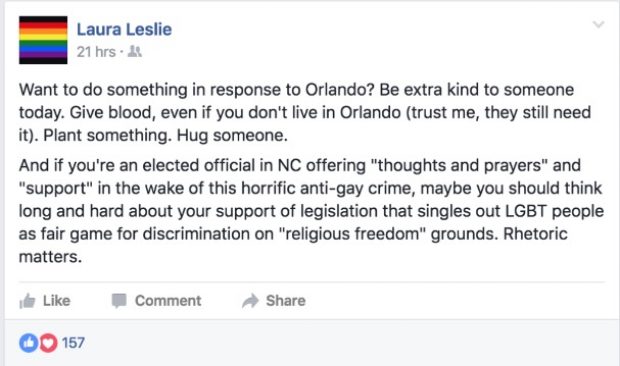 In a second Facebook post, Leslie wrote: “This is not ‘radical Islamic terrorism.’ This is a mentally ill homophobe who drove over an hour to target a gay club and blamed his religion for something he wanted to do anyway.” (RELATED: Orlando Terrorist Omar Mateen Once Threatened To Shoot Up Elementary School) 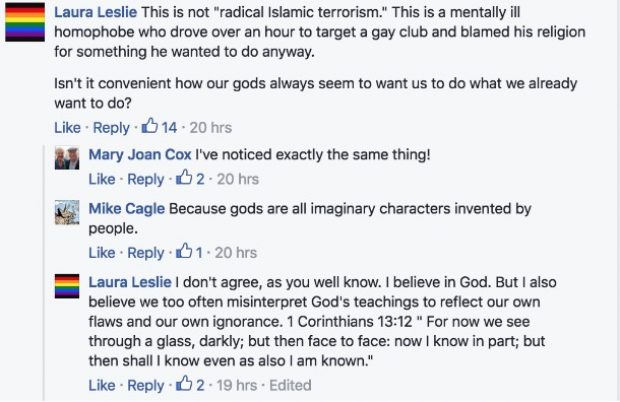 Omar Mateen, the Muslim man who carried out the Orlando terrorist attack, was a regular patron of the club and reportedly used gay dating apps. (RELATED: Orlando Shooter Omar Mateen Was A Pulse Regular Who Used Gay Dating App)

During the attack, Mateen called 911 and pledged his allegiance to ISIS.

When he was in fifth grade, according to his classmates, Mateen threatened to bring a gun to school and shoot everyone there.

WRAL declined to provide a comment to The Daily Caller regarding Leslie’s posts.