FBI data reported last week from the National Instant Criminal Background Check System (NICS) shows that a 41 percent increase in background checks conducted for firearm carry and purchase permits in May 2016, as compared to May 2015, elevated the total number of firearm checks for that month to the highest on record for any month of May. May 2016 was the 13th consecutive month that the total number of firearm-related checks for a month exceeded the tallies achieved during the same month in previous years.

Additionally, if the increase in checks thus far this year holds for the next seven months, the final tally for firearm background checks in 2016 will exceed 24 million. That would be more than in any previous year, including 2013, when gun sales soared in response to President Barack Obama’s effort to promote “universal” background check legislation along with a new “assault weapon” and “large” magazine ban that would have banned more guns and magazines than the Clinton Gun Ban imposed between September 1994 and September 2004.

NICS checks don’t precisely indicate the number of firearms acquired in a given time frame. But the trend in checks makes clear that Americans are acquiring firearms at a record pace. The annual number of checks has risen from 12.7 million during the last year of President George W. Bush’s administration to an average of 22 million during Obama’s second term. 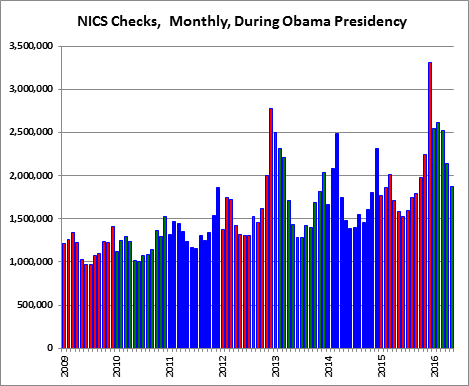 Know your gun laws – Click here to see them