Throughout his filibuster inspired by the terrorist attack in Orlando, Florida, Murphy cited his experience as the congressman representing the district which contains Newtown, the site of the 2012 mass murder of 27 innocent people, including 20 children, at Sandy Hook Elementary School. By Thursday evening, Senator Murphy was fundraising for Hillary Clinton using those same murders.

In a fundraising email with the subject line, “I’ll never forget the scene from Newtown,” Senator Murphy wrote:

I was the Congressman from Newtown, Connecticut when tragedy struck Sandy Hook Elementary School on December 14th, 2012. As long as I live, I’ll never forget the scene at the firehouse when twenty-six families were told they would not be reunited with their children and loved ones.

For years, Congress has failed those families and the victims of gun violence all across the country.

That is why yesterday, starting at 11:21 a.m., I decided to stand on the Senate floor and talk for as long as I could about the need to prevent gun violence. And with the help of more than 30 of my colleagues, we demanded immediate action to make our communities safer from gun violence:

I can tell you that as the hours progressed, my colleagues heard your calls for change grow louder and louder. And after almost fifteen hours of filibustering, I was proud to be able to announce that Republicans had agreed to our demand for a vote on legislation that would keep guns out of the hands of suspected terrorists and require comprehensive background checks for gun purchases.

That is just one step, and our fight is far from over. But there are millions of voices out there who believe like we do that now is the time for action. And if we keep making ourselves heard, we will save lives.

Add your voice to Hillary Clinton’s and mine to demand Congress take immediate action to make our communities safer from gun violence:

(At this point there is a link to “add my name.” Once you enter your email address and zip code you are directed to a donation page.)

Whether it’s shootings fueled by racism, rage against women, homophobia, extremist ideologies, or severe mental illness, I shudder to think what it says about us as a nation if we don’t even attempt to make a good faith effort to end this carnage. We need to re-think whether or not that’s something we are willing to allow. And like President Obama said on Sunday, doing nothing is a choice, too.

So I am going to stand with Hillary Clinton and continue this fight until Congress has done everything it can to make our communities safer from gun violence.

Thank you for adding your voice to ours.

After you click the link embedded in the fundraising email, you are directed to a webpage where you have to enter your email address and zip code: 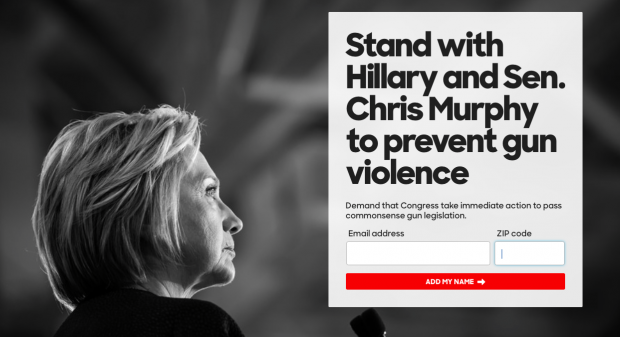 Once you submit your information, which they already have since the link was emailed to you, you are redirected to a page where you are asked to make a donation to Clinton’s campaign: 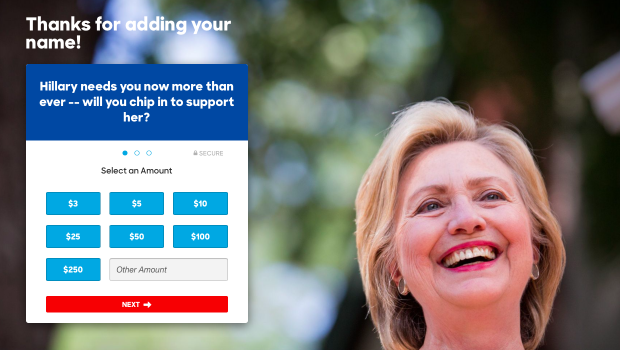