IJ Review‘s Creative Director Benny Johnson doesn’t seems to subscribe to the Golden Rule. Especially since he’s been kicked in the ass so many times.

When Gawker, who extensively covered Johnson’s plagiaristic demise from BuzzFeed, declared bankruptcy, he erupted in joy, saying, “Good riddance you sad sons of bitches.” It’s not as clear why he was so overtaken by glee when Donald Trump fired his campaign manager Corey Lewandowksi Monday. The Mirror requested comment, but he didn’t respond.

Johnson’s comment stems from reports that Lewondowski was trying to shop a trashy story about Ivanka’s husband Jared Kushner.

Johnson punched repeatedly, adding, “Please tell me they grabbed his arm when they did it,” hr wrote, referring to Lewandowski who allegedly pressed his fingers into then-Breitbart News reporter Michelle Fields‘ arm and added an undetermined amount of pressure at an event at Mar-a-Lago. The act was dubbed “simple assault.” Charges were never filed.

Still, Johnson’s venom is mystifying. “For the same reason he does anything,” said a Washington journalist suggesting a motive for Johnson’s ire toward Lewandowski. “He calculated that it was the position that would be most popular among journalists.”

Less popular, however, is Johnson inventing a quote. He ran a picture of Fields and Lewandowski and jokingly ran a quote Lewandowski never said: “In all honesty, I’m going to miss grabbing you & lying about it,” he wrote.

But Johnson wasn’t the only journalist to rejoice in Lewondowski’s ouster.

Jesse Berney, a writer for Rolling Stone, remarked, “I hope for Corey Lewandowski’s sake, the dumpster industry is hiring fire-setters.”

Fields, now a contributor with HuffPost through the 2016 presidential election, wasted no time spitting in Lewandowski’s face (not literally, of course). 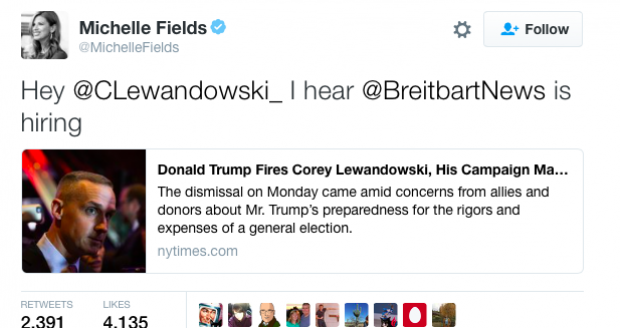 She also went on CNN’s “New Day” and told Chris Cuomo: “I don’t think that Corey Lewandowski was probably very good at his job. He was simply a body man that organized these amazing events for Trump.”

But news about Lewandowski wasn’t all bad. There’s a chance he could land a book deal.

“That sound you hear is the stampede of publishers heading towards Corey Lewandowski with a book deal,” wrote Nina Diamond, a writer for Poynter, LAT, Sun Sentinel and the Chicago Tribune.