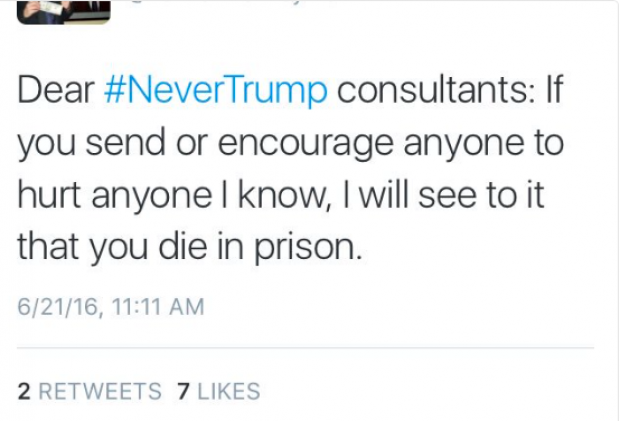 Howley explained, “Poorly worded tweet. Not what I meant, so I deleted. And you involve @safety? Blocked, asshole! My prison references are hilarious!.”

He explained that he was not issuing a physical threat to Never Trumpers. “I merely said that people who hurt those I love will get a life sentence,” he wrote. “Just concerned for those I love.”

Some on Twitter pounced on Howley. He said, “I was just responding to threats on me. …I don’t even know who you are. My tweet had nothing to do with you. Can’t you just leave me alone? I mean, seriously. Who cares?”

But he couldn’t resist insulting the “Cucks” as he calls them.

“#NeverTrump continues to be a bunch of social justice warriors,” he wrote. “You can’t make a good old-fashioned prison reference anymore? Eat dicks!”

He added, “I’m the greatest journalist of my time. ‘Eat dicks’ is just a wonderful turn of phrase.”

Howley assured his foes that he’s not upset about their attacks.

When a woman named Sarah Rumpf — whose Twitter handle is “@rumpfshaker” — said she met Howley at CPAC and called him an “insufferable brat,” Howley fired back: “Yeah, CPAC is totally the Cool Kids Club. According to @rumpfshaker, I am known as a ‘brat’ at CPAC! What can I do to improve my rep among clueless 47-year old virgins?”

Just when you think this rampage is over, it is not.

Howley pressed on, remarking about what life would be like in prison if he was there.

“If I’m on the inside, I’ll not only run the yard and be respected by all groups, but the guards would fear me and work with me too,” he wrote. “When you’re on the inside, connections matter. That’s why I would run the yard, treat it like a country club, and do my time in peace!”

Howley soon attacked Washington Free Beacon‘s Lachlan Markay, saying,  “Lachlan tried to come into Breitbart party with his MSM cuck friends. He saw me and two of my bros, literally ran out like a girl. As Lachlan fled from sight of me and two of my loyal Bros, he had to go back and get something he left, shielding his face before exit.”

Markay seemed to speak for everyone at the WFB.

“When an unstable fmr employee intersperses tweets abt prison and Free Beacon hatred, I’m comforted that @StephenGutowski packs at the office,” he wrote.

Stephen Gutowski is a staff writer at Washington Free Beacon.

Full disclosure: Howley is a former reporter for The Daily Caller. He ate barbecue Cheetos at the next desk situated diagonally from mine.