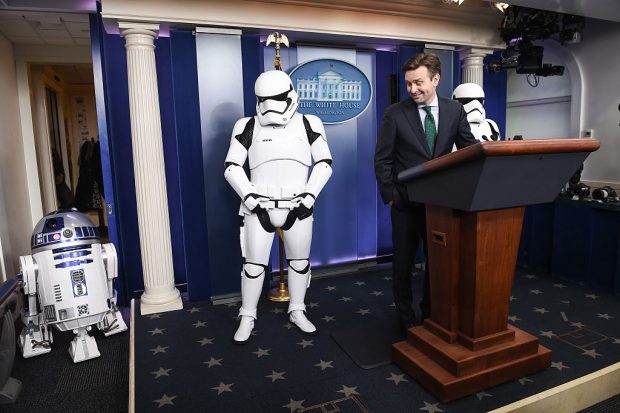 In Chris Cuomo’s final interview question on CNN’s “New Day”, the host said to Earnest: “You want to deal with this problem that happened in Orlando, you want to take it on, then call it what it is. The president’s speech, while seen as effective on many different levels, didn’t move the needle much on Islam, radical Islamic terror. People still feel [Obama] doesn’t say it because he is afraid of dealing with this problem, that he lacks a fundamental toughness about calling it what it is. He didn’t move the needle on that, Josh. And people even look at Orlando and say, ‘Well, this is a reflection of that weakness as well.’ Fair?” (RELATED: Obama Lashes Out At Trump, Defends Not Using ‘Radical Islam’ Label)

“No, Chris. It is outrageous, actually,” Earnest replied. “The truth of the matter is, the individuals who spend most of their time talking about radical Islamic terrorism are individuals like Republicans in the senate who voted against legislation that would prevent those individuals from being able to buy a gun. And those are individuals who not actually put forward their own strategy for keeping the country safe.” (RELATED: Trump Calls On Obama To Resign For Not Calling Orlando Attack ‘Radical Islamic Terrorism’ [VIDEO])

“Using the term ‘radical Islamic extremism’ is not a counterterrorism strategy,” Earnest argued. “It is a political talking point, plain and simple. And what the president of the United States has done, [he] has put forward a comprehensive strategy to squeeze [the] Islamic state in Iraq and Syria to inhibit their ability to recruit and radicalize around the globe.” (RELATED: CIA Admits US Has Not Reduced ISIS’s Global Terror Reach [VIDEO])

Obama “has aggressively supported proposals that would make it harder for having ties to that extremist organization from being able to walk into a gun store to guy a gun,” Earnest said. Obama “has built an international coalition of 65 nations to take the fight to ISIL. So the president has implemented a strategy that has put increasing pressure on ISIL and has made the country safer, but he has not relied on a political talking point as a substitute for a counterterrorism strategy.” (RELATED: Obama: ISIS Fighters Are Not ‘Religious Warriors. They Are Thugs’ [VIDEO])

“Republicans in the Senate who like to talk have that luxury. But when you’re the president of the United States, and you’re focused on keeping the country safe, you don’t have that luxury,” Earnest claimed. “And what you do is you focus on a strategy that is actually going to put pressure on ISIL, that’s going to make sure we send a clear message to the Muslim community in the United States, that we want their help in protecting the country and protecting their community from efforts from ISIL to radicalize vulnerable members of our population. So the president is focused on a strategy. You’ve got Republicans in the congress who are focused on a talking point.”