Two economic policy experts discussed ways the next president can strengthen the economic market, and building a wall between Mexico and the U.S. was not one of them.

On Monday, 30 people attended a panel at The National Press Club in Washington D.C. for a discussion on how America can better its financial system and hold its spot as the largest national economy.

Senior economist at the RAND Corporation Howard Shatz and U.S. Trade Representative (USTR) Michael Froman spoke on the panel and talked about ways America should move forward economically as a nation.

Using economic power to shape other country’s behavior is one of the ways they provided.

And presumptive Republican candidate Donald Trump’s plan to use America’s international economic stability and Mexico’s dependency on money wire systems in the U.S., to get Mexico to pay for a border wall between its country and the U.S is one way he’s trying to use America’s economic power to shape other country’s actions.

Shatz said that if the U.S. is going to continue being the top national economy, it will need to partner with countries like Mexico and building a wall will not do that.

“Mexico has proved to be a very good market for the United States — [for] our natural gas … exports are increasing,” Shatz said. “Mexico has realized that it will benefit best by being a part of the system and not fighting against it.” 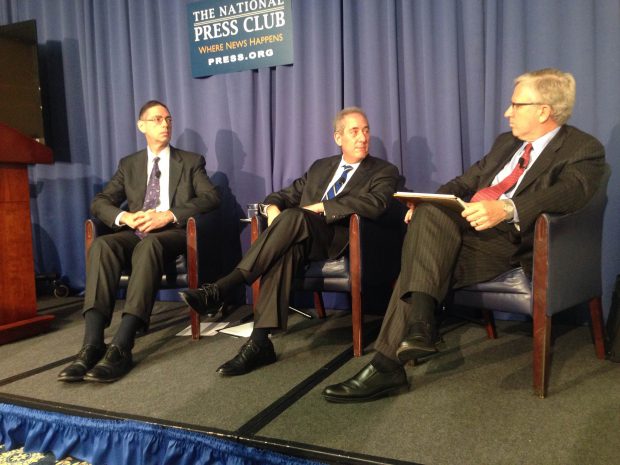 Shatz said that the wall would do very little because there are other ways to enter the U.S. He added that creating the wall would make people in the U.S. never want to leave and people outside of the U.S. to come quicker before the border is finished — only increasing immigration.

Shatz said that the immigrants who come to America are, in general, good for the economy and creating the wall would hurt America’s relationship with Mexico and the U.S. financially.

However, Shatz said that Trump’s plan for the wall calls attention to a higher issue — the U.S’s lack of control over immigration.

“I would interpret the wall issue as is a recognition that our immigration system is not working very well,” Shatz said. “So rather a single policy that won’t solve the immigration problem, it’s really going to call Congress and [the next president] to work more closely together.”

Trump’s website says, “Mexico has taken advantage of us in another way as well: gangs, drug traffickers and cartels have freely exploited our open borders and committed vast numbers of crimes inside the United States” and calls for a use of America’s leverage to “Make America Great Again.”

However, Jay Hellman, an alumnus at the RAND Corporation who attended the event, said that Trump’s wall policy may hurt the economy rather than strengthen it.

“It would be now a collective interest to see our common interests rather than our differences,” Hellman said. “And the wall is the antithesis of that.”