Gmail users are claiming that Google is filtering emails from Donald Trump’s campaign into their spam boxes.

There have been previous reports, denied by Google, that the search engine was manipulating search autocomplete results in favor of Hillary Clinton. Julian Assange, founder of WikiLeaks, has previously said, “Google is directly engaged with Hillary Clinton’s campaign.”

Google has not responded to request for comment about the spam email claims.

Hadn’t received emails from Trump campaign for a while. Checked my Junk Folder. Google’s reprogrammed them as spam. pic.twitter.com/NqI0LUg7f0

@DanaPerino Received a Trump solicitation early this AM. Very interesting that GMail slid this directly into SPAM. pic.twitter.com/wxOWiVEZTL 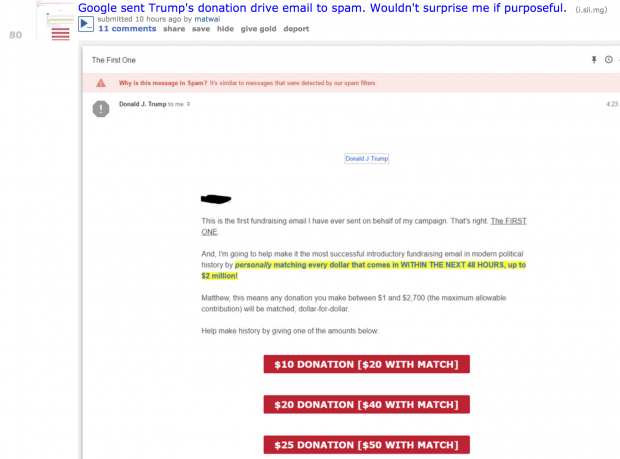 The claim that Trump emails appear in Google’s spam folder is not a new one. This Reddit post below is from two weeks ago: