Oral arguments for the Washington Post race discrimination lawsuit have been scheduled by the United States Court of Appeals for the District of Columbia Circuit for Sept. 6.

Lawyers for the Washington Post, whose news and opinion columns are awash with articles that claim statistical racial imbalances definitively prove bigotry, are likely to argue the opposite before a three-judge panel:  Even though award-winning salesman Dave De Jesus, 63, was fired out of the blue around the same time the paper purged 47 older blacks, he was cut loose for non-discriminatory reasons.

The Post has furiously contended since De Jesus sued in 2013 that the ouster of similarly situated blacks is irrelevant to his own racial bias claim. “Plaintiff’s so-called ‘statistical evidence,'” is “meaningless,” Post lawyer Jackie Holmes argued in court papers last month.

Hmm. Imagine how the liberal broadsheet would treat Donald Trump if he used these arguments to justify pushing multiple black employees out the door and replacing them, as the Post did, mostly with younger whites.

But United States District Court Judge John Bates in September accepted the defense and issued summary judgment for the Washington Post. Bates said that even though De Jesus, was fired without the required progressive discipline by a white boss who suddenly shrieked and cursed at him, there was no obvious racial animus involved.

Because an objective jury could not possibly conclude discrimination occurred De Jesus was not entitled to a trial, Bates reasoned.

Bates also disregarded the fact that De Jesus actually got his job back on orders of a Newspaper Guild arbitrator who said he was fired without cause and without the required progressive discipline, also rejecting the Post contention that De Jesus was guilty of insubordination. He placed no weight on sworn affidavits from other older blacks who left the paper, including one who claimed he was pushed out the door by Washington Post communications director Kristine Corratti.

Another affidavit accused Ethan Selzer, the white vice-president who signed off on De Jesus’s dismissal, of making racist jokes about black subordinates. Selzer, who does not dispute the charges, was not disciplined by his own boss, Jay Kennedy, who also approved the firing. 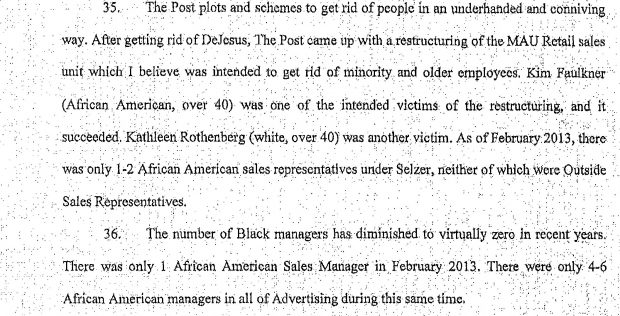 In their March appeal lawyers for De Jesus argued that Bates’ applied the wrong legal standard when he said all the statistical evidence and racial harassment could not be used to question the Post’s stated non-discriminatory rationale for the dismissal.

“The Post’s purported reasons were mere pretext as overwhelmingly evidenced by The Post’s discriminatory downsizing practices, the final and binding Arbitration rulings, and numerous irregularities, inconsistencies, lies and cover-ups regarding DeJesus’ termination. The district court erred by construing all inferences regarding each such piece of evidence in favor of The Post, instead of DeJesus.”

The hearing is set for 9:30 a.m. for the Tuesday after Labor Day.