America has less than 1 percent of the energy storage capacity necessary for wind and solar to meet the green goal of “100 percent green energy,” according to an analysis of federal data by The Daily Caller News Foundation.

TheDCNF examined capacity data from the U.S. Energy Information Administration and concluded America only has the capacity to store 21,378 megawatts of energy, 99 percent of which is done by pumping water up a hill. Wind and solar power advocates acknowledge green energy only works if there’s a method of storing power for times when the sun isn’t shining and the wind isn’t blowing with batteries, but haven’t thought about where America will store the 3,260,000 megawatts of energy it used in 2013.

Even though America is producing more energy than ever before thanks to a boom in oil and natural gas, energy storage hasn’t increased fast enough to make wind or solar power feasible. America also isn’t building enough storage capacity to change this fundamental equation, as the country adding a mere 221 megawatts of storage capacity in 2015. 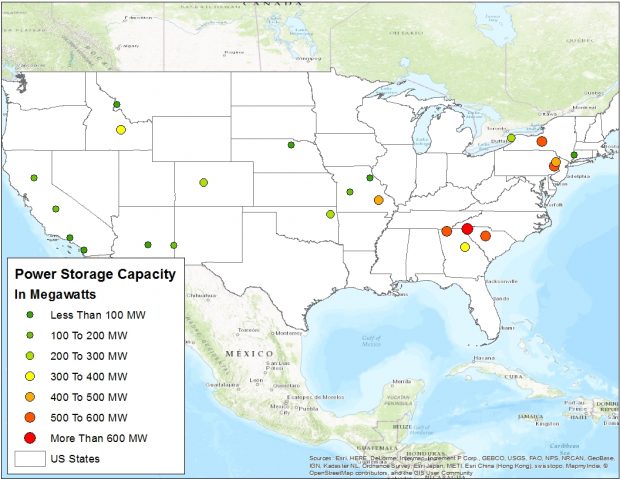 Without large-scale energy storage,  the power grid needs demand for energy to exactly match supply to function. Power demand is relatively predictable, and conventional power plans, like nuclear plants and natural gas, can adjust output accordingly. Solar and wind power, however, can’t easily adjust output. They also provide power unpredictably relative to conventional power sources, and this generally doesn’t coincide with the times when power is most needed. Peak energy demand also occurs in the evenings, when solar power is going offline. This means that without about 150 times more capacity to store power for later use, wind and solar simply won’t work.

On an especially cloudy or windless day, the electrical grid can’t supply enough power from solar or wind alone. Wind and solar also run the risk of producing too much power, which can overload and fry the power grid. This is why electrical companies will occasionally pay consumers to take electricity. Germany paid wind farms $548 million to switch off last year to avoid grid damage. Adding conventional power plants which only provide power at intermittent and unpredictable times makes the power grid more fragile.

The lack of energy storage capacity is one of the reasons that solar and wind power still only accounted for 0.6 and 4.7 percent of the electricity created in America during 2015, according to the Energy Information Administration.

Purchasing enough batteries to provide just three days of storage for an average American household costs about $15,000, and those batteries only last for about five years and are very difficult to recycle.

This is true for home power storage as well, even with the latest batteries, which were invented to make rooftop solar panels and wind turbines economically viable for consumters. A Tesla Powerwall capable of powering a home costs $7,340 to buy, and a conservative analysis estimates a Powerwall can save its owner a maximum of $1.06 a day.

Such a  battery would take almost 40 years, or roughly four times its warranty period, to pay for itself, according to analysis performed by the Institute for Energy Research. Tesla only offers five- to 10-year warranties on its Powerwalls, and predicts they will last for only 15 years.

One of the world’s largest and most powerful batteries, located in Fairbanks, Ala., weighs 1,300-metric tons and is larger than a football field. It can only provide enough electricity for about 12,000 residents, or 38 percent of Fairbanks’ population, for seven minutes. That’s useful for short outages, which happen a lot in Alaska, but isn’t effective enough to act as a reserve for solar and wind.

Despite the lack of energy storage, solar and wind have been heavily subsidized since at least the 1970s. In 2010, wind power alone received $5 billion in subsidies, swamping the $654 million oil and gas received in subsides. Solar and wind power get 326 and 69 times more in subsidies than coal, oil, and natural gas per amount of energy produced.