How far we’ve come as a society in just a few hundred years. Take threatening a public official, for example. Back in the old days, you had to get out your quill and parchment, write out your threat in longhand, put a stamp on an envelope, and wait for some guy on a horse to deliver your threat to its target. Then the threat would end up on a pile of other threats. Who knew how long it would take your target to read your threat? What a lot of bother!

But in 2016, you can be a stupid, hateful lunatic at the speed of electrons. Scott MacFarlane, WRC-TV:

A Virginia man who works as an Uber driver tweeted threats to shoot at least two U.S. senators, according to testimony at a hearing Monday in a Virginia court.

Kyler Schmitz has been ordered held in jail.

In at least one of the tweets, sent in the days immediately after the Orlando nightclub shooting, Schmitz allegedly threatened to shoot Sen. Roy Blunt (R-Mo.). The message was directed at Blunt’s official Twitter handle.

And here’s one of the hilarious parody threats to Republican congressmen:

Clearly, young Mr. Schmitz’s sense of humor is just too mordantly sophisticated for the Capitol Police.

To recap: An Islamic terrorist murdered 49 people in a gay nightclub because he thought Allah wanted him to, and young Mr. Schmitz’s response was to threaten to murder some Republican congressmen. And now his defense is that he was just kidding. Get it?

The reason this is local news, and not national news, is because this fellow only threatened Republicans. This would only be a big deal if he’d threatened the good guys. But Schmitz is a designated victim (#LoveWins) and he hates the Second Amendment, so he has the sympathies of the press. And, of course, Gawker: 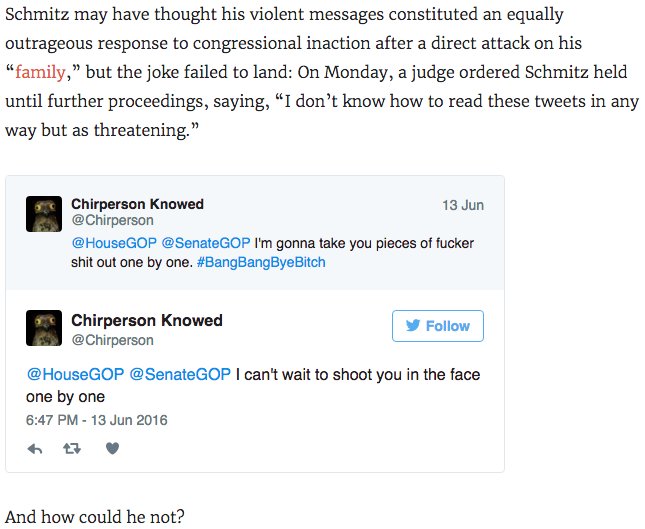 “How could he not,” indeed. Hatred is as natural as breathing to these people.

By the way, Twitter hasn’t suspended young Mr. Schmitz (@chirperson) for violating their terms of service. The Capitol Police think he did something wrong, but Twitter doesn’t. All’s fair when you’re targeting Republicans.

P.S. From the Gawker writer cited above. If this is the case, I regret the error.

@jtLOL @HouseGOP @SenateGOP "And how could he not?" was meant to refer to the judge's reaction, but I can see the ambiguity. Not good.

@jtLOL Will take this as a reminder to exercise more caution when blogging potentially inflammatory stories up late.