MSNBC’s Mika Brzezinski says that the reason Hillary Clinton is viewed as significantly less honest and straightforward than Donald Trump is because she plays the “victim” too much.

On Tuesday’s “Morning Joe,” the panel discussed the recent NBC/Wall Street Journal poll that indicated 41 percent of respondents think Trump is honest and straightforward compared to 25 percent who think the same about Clinton.

Bloomberg Politics managing editor and panelist Mark Halperin commented, “This is why a lot of people in the Trump organization are quietly confident.”

Brzezinski then argued that the reason Trump is viewed as more honest and straightforward is because “Hillary Clinton says, ‘Oh, I’ve been attacked. I’ve been attacked. And you know, after years and years of attacks people are going to–‘ No, don’t play the victim.”

Clinton has “been focused on being attacked a little too much,” Brzezinski said. 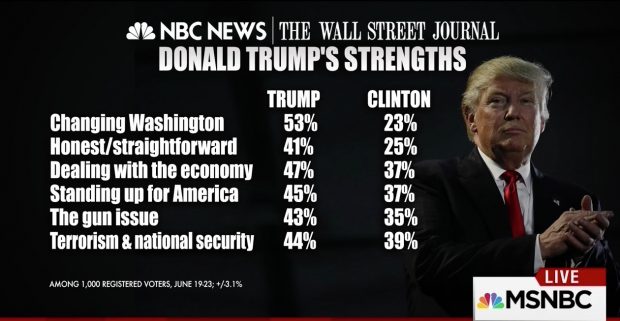 The liberal co-host went on to argue that “Trump is honest about the fact that he’s dishonest. He’s like, ‘Hey, this is me. I say this, I say that. I’m Donald, I’m honest about it.'”