“Hey, if you’re the bicyclist who saw me get rear-ended on Arcola Ave., thanks for checking in. Can you contact me in case I need a witness?”

Karla Campos (a liberal follower): “Fetuses are not people. Quit telling your gullible audience that they are. There is a difference.”

Dana Loesch (TheBlaze): “Yes, they are. Go learn about science. Enjoy your day.”

Editor concerned about ‘so much’ negative energy in her midst

“This has been such a difficult season. So much negative energy surrounding me. Working on finding a way to cleanse it all.” — Jemilah Lemieux, senior editor, Ebony.

Corey Lewandowski deceives BuzzFeed‘s McKay Coppins and anyone is shocked

See the stark difference in ledes between Politico and The Globe and Mail.

The Globe and Mail:

BuzzFeed Canada is cutting its political reporting staff a little more than a year after its official launch in a move that suggests there are cracks in the social news company’s plan to expand its reporting capabilities outside the United States.

Buzzfeed Canada is scaling back its Canadian politics coverage and will no longer have a presence in the Canadian capital of Ottawa, a Buzzfeed spokeswoman confirmed to POLITICO.

…The elimination of the Ottawa bureau is likely to further the speculation that Buzzfeed is shifting its focus away from its text-centric news division as it invests aggressively in its Los Angeles-based video division, and a new video news unit being developed in New York.

MSNBC regular Nicolle Wallace replied, “The drinks will be HUUUGe! Come one, come all!”

Bustos comes to the pub from the AP. Before that, he worked at the Miami Herald for a decade. Of course he has a connection to Politico Florida Playbook writer Marc Caputo. Bustos directed him in a team in Tallahassee when Caputo worked for the Miami Herald. Read all the specifics here.

“I’m watching my friend @ananavarro while on a plane and before she even starts speaking I find myself shouting ‘you go girlfriend!’ @CNN” — Montel Williams, self-appointed Twitter expert, veterans spokesman, etc… 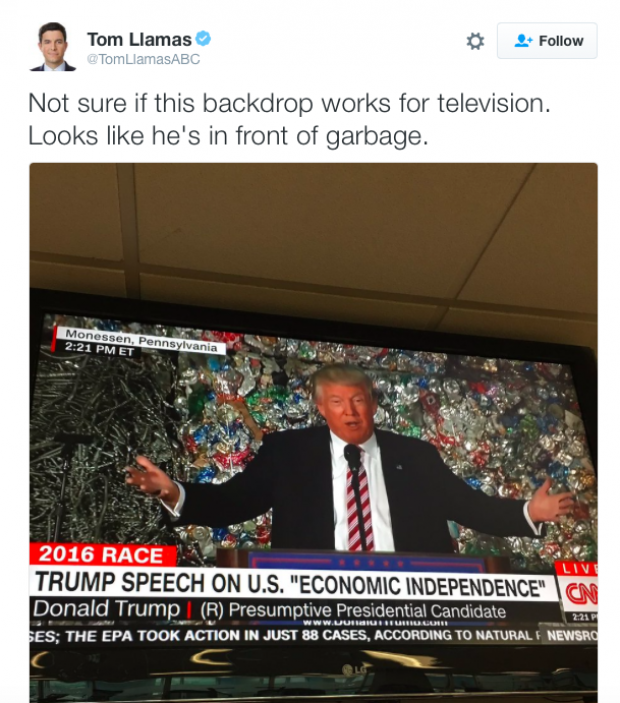 AMERICAblog’s John Aravosis agreed… writing, “Whose bright idea was it to have Trump give a speech in front of a pile of garbage? What, feces weren’t available?”

“If you go to Chipotle and they tear the tortilla during the final wrap & you don’t get a re-wrap, you’re a monster.” — Paul Rigney, NBC News photographer.