The Tucson teenager arrested on Friday for allegedly scheming to blow up government buildings in Arizona’s two most populous counties lives in a ritzy, luxurious neighborhood brimming with million-dollar homes.

The gated community north of the city features a pair of actual wrought-iron gates at the entrance. Between the gates is a little hut for security guards.

There is also a sign at the entrance of the subdivision which warns — in large letters — against trespassing.

Beyond the security gate are winding, narrow streets.

Khan and his family live on Camino Boscaje Escondido, according to the Daily Independent. The curvy street with a mouthful of a name — it means Hidden Grove Road — is dotted with just a few large homes.

Here is an aerial view of the street from Google Maps. Note the spacious lots — often three acres or more — and the profusion of swimming pools. 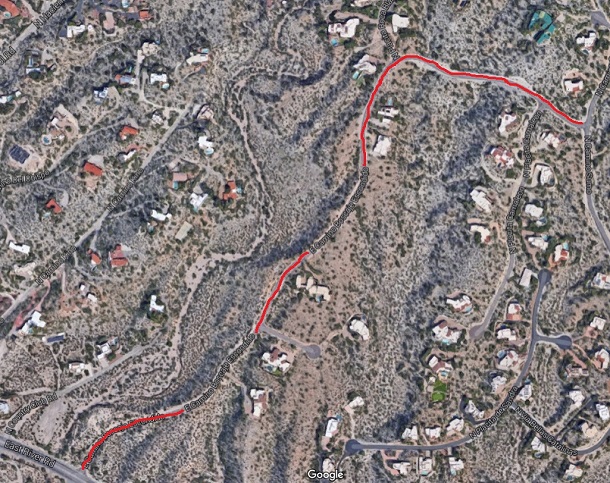 “The tranquil setting” of the Catalina Foothills “is a nature lover’s paradise” which offers “extraordinary Catalina mountain views” according to a realtor on YouTube trying to sell plots of land.

A joint operation between the Federal Bureau of Investigation and the office of the Arizona Attorney General resulted in Khan’s arrest.

Arizona Attorney General spokeswoman Mia Garcia refused to provide much in the way of details about Khan, saying that allegations against him have been sealed.

It’s not clear if Khan is an adherent of Islam.

The surname Khan originates from Turkic and Mongolian ethnic groups. Today, people with the last name are most commonly Muslims from Afghanistan and Pakistan, according to the Daily Mail.

A spokesman for the Tucson Islamic Center, Taha Hasan, said he has “no acquaintance or knowledge of this man.” Hasan also noted that the center serves hundreds of Muslims each week.

“It is very possible that at one time or another, he may have visited the center. However, I can say with certainty that he was not a regular member or attendee of the mosque,” Hasan told the Daily Independent.

Hasan also noted that the Tucson Islamic Center “has continuously and repeatedly denounced any and all acts of terrorism.”

Khan was a student at Catalina Foothills High School, a posh public school in 2013. That period in his life was very brief, though.

“There were behavior issues, and his parent withdrew him to avoid disciplinary action,” school district superintendent Mary Kamerzell said in a statement obtained by The Daily Caller. “We do not know where he went to school since that time.”

Garcia, the Attorney General’s Office spokeswoman, did say law enforcement officials had no evidence of a credible Fourth of July weekend terror threat in which Khan — or anyone else — may have been involved.

“The timing of the arrest has nothing to do with the Fourth of July,” Garcia said, according to Phoenix CBS affiliate KPHO-TV.

She also said she expects no additional terrorism-related arrests in the Tucson area.

The Arizona Republic called the Khan residence and spoke to a man who identified himself as Mahin Khan’s father but declined to speak further.

Neighbors of the Khans — at a previous residence — said family members tended to keep to themselves.

Mahin Khan, who celebrated his eighteenth birthday only two weeks ago, faces a pair of charges: conspiracy to commit terrorism and terrorism, straight up.

After he was arrested, Khan was delivered to the Maricopa County jail.

His initial appearance in court was Saturday. The presiding judge ordered Khan held with no possibility of bail.

It’s not clear if Khan has an attorney.

In February and March of this year, Tucson residents reported a couple of incidents of graffiti reading “ISIS,” according to local Fox affiliate KMSB.