As of Tuesday afternoon, more than 225,000 votes had been counted and Gingrich was in the lead with about 40 percent. Ernst was at 31 percent, Sessions was at 15 percent, Pence was at 7 percent, Christie was at 6 percent and Corker was at 2 percent. 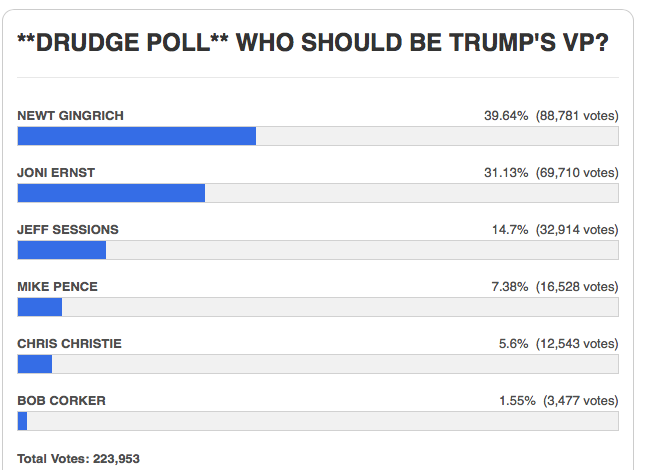 The Drudge poll shows Gingrich in the lead. (Screengrab, The Drudge Report)

Trump is a known reader of the Drudge Report and regularly mentions the site’s polls, boasting of winning them after Republican primary debates.

As The Daily Caller reported in a recent analysis of potential running mates, Gingrich seems to be openly campaigning for the job, routinely speaking positively of Trump on cable news. He has experience running for the White House and matches Trump’s desired trait of a running mate who knows how to get legislation passed. He is reportedly planning to campaign with Trump this week.

Trump tweeted over the weekend that he met with Ernst, a veteran who was elected to the Senate in 2014.

Sessions, perhaps the Republican candidate’s closest ally on Capitol Hill, has said he is open to working in a Trump administration.

Pence, a former radio host and member of Congress before becoming governor, also met with Trump over the weekend.

Since dropping out of the presidential race, Christie has shown loyalty to Trump, campaigning for him across the country.

Corker, the chairman of the Senate Foreign Relations Committee, is scheduled to campaign with Trump on Tuesday.

1
Kayleigh McEnany Turns Briefing On Its Head, Demands Answers From The Press
Media
2
'Indefensible And Grotesque': Jonah Goldberg Slams Kayleigh McEnany, And Chris Wallace Joins In
Media
3
Memorial Day Flashback: Dan Crenshaw Remembers His Fallen Brothers In Powerful Tribute
Military
4
Police Throw Out Spike Strip To Stop A Truck. The End Result Is Shocking
Editorial
5
Trump And Pelosi Are Pulling Out The Big Guns On Vote-By-Mail. What Does This Mean For November?
Politics