People are furious at Kaley Cuoco for the “disrespectful” way she treated the American flag over the holiday weekend.

Though the 30-year-old actress meant to thank a dog boarding facility when she posted a photo of her three dogs sitting on an American flag on Instagram, she infuriated hundreds who noticed the flag was on the ground. (RELATED: Kaley Cuoco Criticizes Cincinnati Zoo For Senseless’ Killing Of Gorilla) 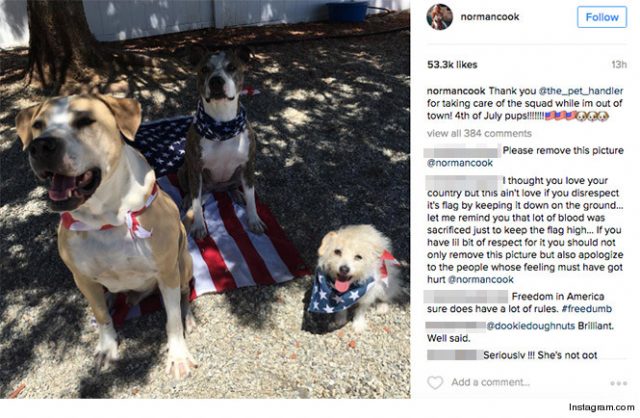 “That’s not a towel,” one of her followers commented. “I believe in the right to burn the flag in protest as long as it is in context, that’s why so many gave their lives, for freedom. But this is not that, this is simply disrespectful. That’s a flag. A symbol of what people have sacrificed.”

“Let me remind you that lot of blood was sacrificed just to keep the flag high,” another said.

“Why the fuck is your dog running its asshole on the fucking flag?!?! I get that your trying to act patriotic but this is definitely in VERY bad taste!!!” (RELATED: The Real Reason Kaley Cuoco Is Getting Divorced Is Shocking)