President Obama enthusiastically campaigned on behalf of Hillary Clinton on Tuesday, calling her the most qualified presidential candidate in American history. But the two Democrats had a frigid (at best) relationship the last time Clinton ran for president in 2008. 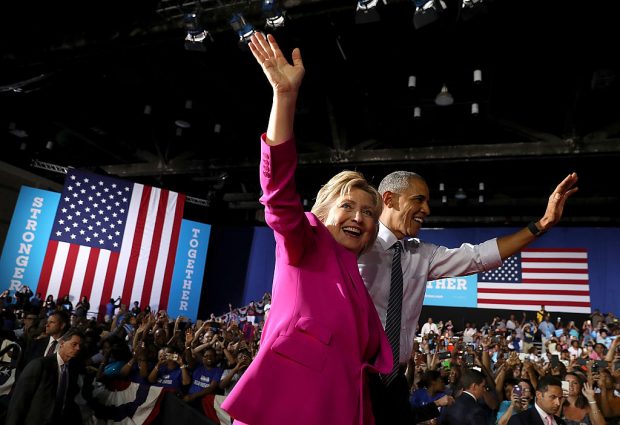 One major point of tension came after a March 2007 Clinton campaign memo leaked to the press. In the memo, Clinton’s chief strategist Mark Penn said he couldn’t imagine America electing Obama during a time of war because he wasn’t “fundamentally American.”

“All of these articles about his boyhood in Indonesia and his life in Hawaii are geared towards showing his background is diverse, multicultural and putting that in a new light,” Penn wrote. “Save it for 2050.”

“It also exposes a very strong weakness for him — his roots to basic American values are at best limited. I cannot imagine America electing a president during a time of war who is not at his center fundamentally American in his thinking and values.”

“He told the people of [New Hampshire] yesterday he has a Kansas accent because his mother was from there. His mother lived in many states as far as we can tell — but this is an example of the nonsense he uses to cover this up,” Penn continued.

“Let’s explicitly own ‘American’ in our programs, the speeches and the values. He doesn’t,” Penn said later.

Another point of hostility between the two Democrats came when Clinton’s New Hampshire campaign chair Billy Shaheen speculated that Republicans would attack Obama as a drug dealer. “It’ll be, ‘When was the last time? Did you ever give drugs to anyone? Did you sell them to anyone?’ There are so many openings for Republican dirty tricks,” he said.

Clinton later offered her apology to Obama over the attack, saying she had nothing to do with it. He refused her apology, however, and accused her campaign of stoking rumors that he was a Muslim. After he rejected her apology, Clinton reportedly “exploded on Obama” in anger.