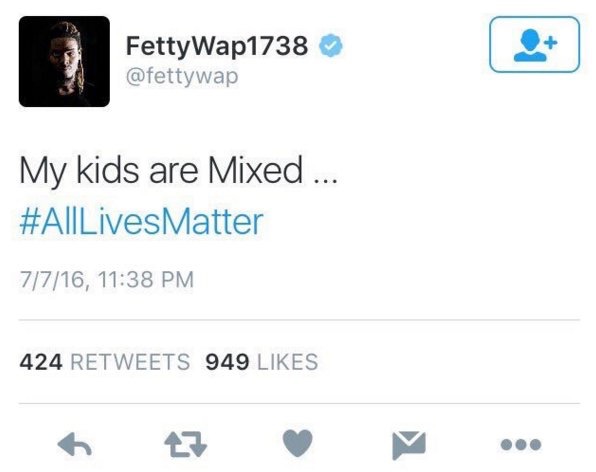 Backlash included jokes about the singer’s one eye inhibiting his ability to see all points of view and a barrage of tweets detailing why the Black Lives Matter movement is important.

Fetty then tweeted at the Dallas Police Department account questioning why they “can’t find the killer when one of us get hit ?”

At some point after receiving eight tweets from a fan about the BLM movement, Fetty deleted his original tweet about his children and posted an apology on his Instagram account.

“I apologized a to a thousand ppl because I didn’t fully understand the hashtag I really sorry to those who I offended … on my life I would never disrespect nobody family I ain’t better than no one I just was speakin for my kids not knowing the full meaning I can take criticism , but I’m man enough to apologize.”

I apologized a to a thousand ppl because I didn’t fully understand the hashtag I really sorry… https://t.co/LydpV9Z79G

@Da_R0ckwilder @melody_MBB at the end of the day even if u have 1% of black blood in U. they see U as black. I hope yall ripped him

@fettywap I just wanted you to know that you said because your children have mixed blood they are better than us.