Rhode Island Sen. Sheldon Whitehouse, a Democrat, has directed 19 of his fellow Democratic senators to attack conservative and libertarian organizations such as Americans for Prosperity and the Cato Institute on the chamber floors for engaging in what the senators call a “web of denial.”

Whitehouse and Democratic Senate Minority Leader Harry Reid – according to an internal email circulated by Emily Enderle, a top environmental policy adviser to Whitehouse, who is leading the hit parade – have created a senate schedule for Monday and Tuesday, requesting the senators lambaste the groups assigned to them.

Reid, Chuck Schumer of New York, and Tim Kaine of Virginia, among others, are set to fire the first volleys Monday – Schumer, for his part, is slated to target libertarian group Mercatus Center, and the Nevada senator will lambaste conservative group Americans for Prosperity.

Democratic senators Al Franken of Minnesota, Barbara Boxer of California, and Whitehouse will needle various groups Tuesday – the Heritage Foundation, the Reason Foundation, and the Hoover Institute are among the conservative and libertarian think tanks pinpointed. 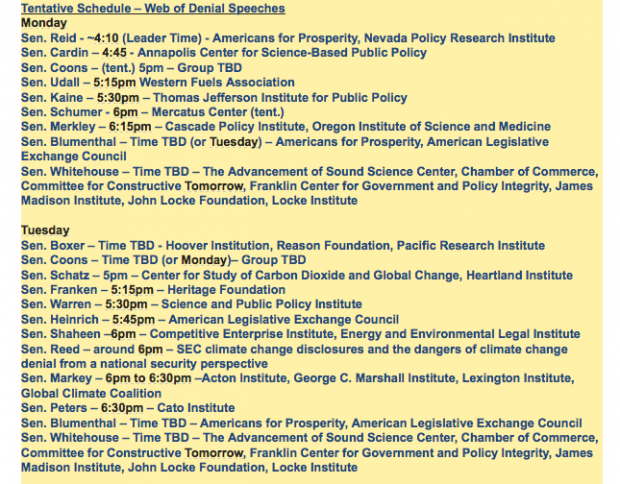 Enderle coordinated her efforts to construct the strategy with several leading environmental groups, she explained in the email – some of the groups include the Sierra Club, Union of Concerned Scientists, and the Clean Water Action.

All of the senators are expected to speak at or around 5 p.m. on their respective days.

The resolution also “urges fossil fuel companies and allied organizations to cooperate with active or future investigations into their climate-change related activities.”

Conservative groups argue this move is another example of senators unfairly targeting the free speech rights of organizations not totting the global warming line.

“It’s unbelievable the level of coordination the Senate Democrats have taken to political intimidate free market organizations,” Molly Drenkard, a spokeswoman with the American Legislative Economic Exchange (ALEC), told The Daily Caller News Foundation. ALEC is one of the conservative groups targeted by the senators.

She added: “Any person or organization—left, right, or nonpartisan—should be concerned when elected officials try to actively stifle free speech. This is clearly the next step in the attorneys general subpoena intimidation campaign.”

Whitehouse has a history of browbeating groups for refusing to break free from oil producers such as Exxon Mobil.

The American Geophysical Union (AGU), which boasts more than 62,000 members worldwide, announced in May it would review and possibly reconsider a decision it made in April to continue its relationship with Exxon after Whitehouse and California Rep. Ted Lieu, a Democrat, pressured the group to divorce from the company.

The two lawmakers argued in a letter to AGU in May that it must purge itself of any affiliation with Exxon because the company, the letter states, consistently claims to support a carbon tax while supposedly financially backing groups skeptical of man-made global warming.

Lieu announced Monday on Twitter that he would help introduce the Web Of Denial Resolution with Whitehouse.