“How does one pack for 17 days of possible riots interspersed with fancy parties?”

“My ears are bleeding,” —Anonymous, reacting to Hillary Clinton accepting Bernie Sanders’ endorsement. The individual was apparently annoyed by the pitch of Clinton’s voice.

“It’s so hard for men to admit they have failed isn’t it?” — Kelsey McKinney, staff culture writer, Fusion.

“The last campaign speech for the losing candidate is always the longest. Last gasp and all that.” — Adam Nagourney, NYT.

“Is it just me, or is it a little off-putting about hearing a dude tell me what ‘Hillary Clinton believes’ when she’s standing right there?” — Politico‘s Glenn Thrush.

“Every sincere liberal I know is disgusted by @SenSanders endorsing @HillaryClinton, who represents everything he supposedly fights against.” — Jedediah Bila, co-host, FNC, Fox Business.

“Not getting Trump campaign press emails again. They’ve managed to kick me off 3 times now. Anyone wanna auto-forward to me?” — HuffPost‘s Sam Stein. On each Trump story, HuffPost writes: “Editor’s note: Donald Trump regularly incites political violence and is a serial liar, rampant xenophobe, racist, misogynist and birther who has repeatedly pledged to ban all Muslims — 1.6 billion members of an entire religion — from entering the U.S.”

Reporter babbles about not listening to men

“Clicking on a Washington Times link, pray for me.” — Mediaite‘s Alexander Griswold.

He’s reacting to this: 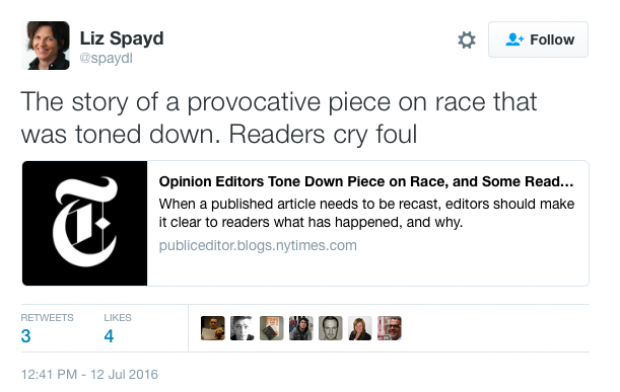 This guy wants to prepare you for convention coverage

“If you’re a journalist covering the conventions and have no conflict experience feel free to hit me up for some conflict 101.” — Tim Pool, Fusion.