The Columbia University journalism program responsible for publishing two articles used as the basis for state attorneys general investigations into ExxonMobil and affiliated think tanks’ global warming no longer has a website.

Columbia’s Energy and Environmental Reporting Project (EERP), which was a program at the graduate school, no longer has its own webpage, and has virtually disappeared from the school’s website. 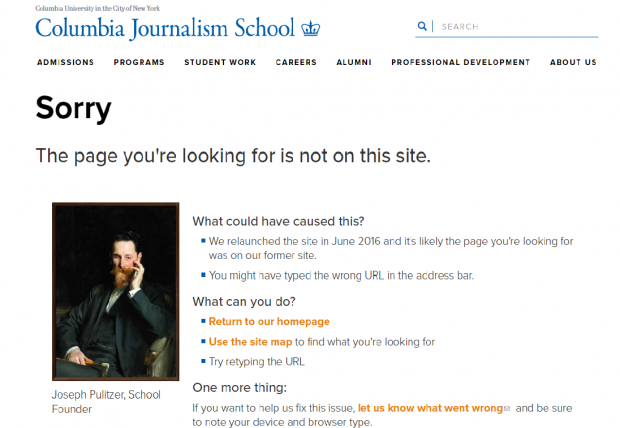 The only mention of it The Daily Caller News Foundation could find was a banner on the Columbia’s science reporting webpage with the caption: “Four recent graduates were on the reporting team that wrote ground-breaking articles for the Los Angeles Times on what Exxon knew about the Earth’s melting Arctic.”

EERP’s website disappearance is interesting given the massive political fight their reporting caused when it was published in October. Reporters claimed documents and interviews showed Exxon knew about the harmful effects selling its oil would have on the climate, but funded groups skeptical of climate science and government regulation.

Columbia reporters claimed Exxon’s scientists developed climate models, which “executives publicly dismissed as unreliable and based on uncertain science,” according to an article published in the Los Angeles Times.

Columbia’s reporting, along with reporting from InsideClimate News, ostensibly served as the basis for state attorneys general investigations into Exxon’s global warming stance.

New York AG Eric Schneiderman launched a probe into Exxon’s representing of global warming risks to its shareholders, citing reporting by Columbia and InsideClimate News. Soon after, AGs from California, Massachusetts and the U.S. Virgin Islands launched investigations into Exxon and conservative groups allegedly tied to the oil company.

InsideClimate itself reported their works made Exxon “more ripe” for an investigation. So, it’s interesting such an influential project at Columbia would lose its internet presence.

EERP’s reporting, however, came into question after Exxon claimed its reporters deliberately “distorted” documents to smear the company.

Columbia fired back at Exxon, claiming its reporters did nothing wrong. Journalism School Dean Steve Coll wrote many of Exxon’s criticisms of the story have to do with the company wanting reporters to interpret factual information differently.

“Your letter disputes the substance of the two articles in a number of respects, but consists largely of attacks on the project’s journalists,” Coll wrote in response to Exxon. “I have concluded that your allegations are unsupported by evidence.”

A DCNF investigation, however, found Columbia did not disclose EERP was funded by wealthy left-wing foundations until after it published its first article in The Los Angeles Times in October. Coll even told Exxon EERP’s funding is “prominently disclosed” on its website.

EERP was funded, in part, by the Rockefeller Brothers Fund (RBF), which is opposed to fossil fuels and has given millions to environmental groups.

“The names of the funders were not listed on the two articles when they were published by the Los Angeles Times, though they were later added online,” CJR reported in December.

“While both pieces published in the Los Angeles Times in October credited the Columbia project as its partner, there was no explicit mention of the philanthropic organizations providing financial support for it,” CJR reported. “After that complaint was made public this week, the Times appended the relevant information to the work online.”

Update: A Columbia spokeswoman responded to TheDCNF’s request for comment after this article was published. Here’s what she said:

“We have recently updated our website, as you rightly noted, and it is still under construction. The site will be fleshed out over the summer, and new pages will feature programs such as the Energy and Environment Reporting Project and others that were not included in this early version. We will include information about the project like funding sources, its director (Susanne Rust) and bios for the reporting fellows.”

Update 2: The Columbia spokeswoman alerted TheDCNF the EERP is now featured on a webpage with other postgraduate fellowships. EERP no longer has its own dedicated webpage, and its new page went up after TheDCNF published its story.