The Daily Dealer has found some great deals so far on Prime Day, and you can expect them to keep coming. Next up is this Instant Pot 7-in-1 Pressure Cooker.

As the “7-in-1” in the name implies, this pressure cooker is also a slow cooker, a rice cooker, sauté/browning machine, a yogurt maker, a steamer and a warmer. (That’s seven functions in one pot).

The appeals of a slow cooker are well known, and the other aspects of this machine make it a good value at its normal $120 price. But for Prime Day, the Instant Pot 7-in-1 Pressure Cooker is 42 percent off. That’s right, Prime members can get it today for only $70. That’s a steal. 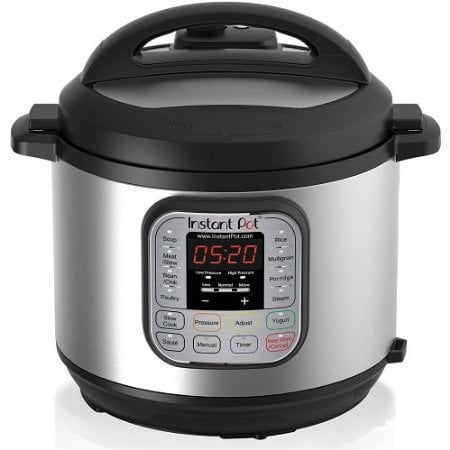 This Instant Pot machine is a #1 Bestseller on Amazon – and not just in some niche category. It is the top selling item in the entire Home & Kitchen section. So, yes, it’s very popular.

For those wondering if people only like the pot because of its steep discount today, I’ll draw your attention to the customer reviews. It has 4.7 out of 5 stars, an aggregate from 8,518. Wow. A LOT of people have reviewed this machine over the years, and 84 percent have given it 5 out of 5 stars.

Here’s the most helpful review, by customer Sandy Nannen in 2014. (Over 5,000 Amazon shoppers have found it “helpful”):

Over the years, I have purchased hundreds of items from Amazon, and for the most part, got what I expected. I never reviewed any of them. But from the moment I received my Instant Pot, I felt that I had purchased something that not only exceeded my expectations, but will make my life easier (and more delicious)!

I am a holistic nutritionist and a follower of a lower carb/paleo/primal lifestyle (and yes, it is not only a food regimen, but a lifestyle). Many of the meals I prepare require advance planning and preparation, and I am OK with that, realizing that it is an investment in my family’s health and wellbeing. I was looking for something that would support my food choices and perhaps make it a little less time-consuming. I have used a crockpot extensively over the past years and while I appreciate the ease of use and the ability to put a meal on the table soon after I got home in the evening, there is that “everything tastes the same” factor I was running into with my family.

So I began thinking about ways to cook my meals faster and realized that a pressure cooker may be the answer. But, I am scared of pressure cookers. Even though my head tells me that people have been using them for many years with no problems, my heart said there was a strong chance I could blow up the entire kitchen, myself included. I had no idea there were electric, programmable pressure cookers out there that would virtually eliminate that worry until I began researching them, first on Amazon, and then on other websites. I eventually purchased the Instant Pot over the others because of the stainless steel insert (no aluminum), the size of the pot (I wanted a larger capacity), and the ease of use.

The day it arrived, I plugged it in and began reading the manual. The manual was very helpful, even included a suggested trial run to familiarize one with the basics. My first meal was potato soup (I know potatoes are not low carb or paleo, but once in a while you gotta have potato soup). I was amazed at how easy and delicious it was to make this soup that would normally take a couple of hours. I just coarsely chopped the vegetables, threw those in the pot, added the seasonings and the liquid, started the pressure cooker option, and in 20 minutes all I had to do was use my immersion blender to puree the soup, add some cheese, stir and it was ready to eat. AND the soup was every bit as good as my slower version that keeps me tied to the kitchen to stir and monitor until it’s done. That is the hidden beauty of this appliance, that while it’s cooking your food, you are free to do other things such as harass your kids to get their homework done. No more watching over a pot!

My second recipe was lemon pepper chicken wings. There is a searing option, so first I browned the wings in a bit of butter, then added lemon pepper, salt, and 2 more tablespoons of butter. Put on the lid, set the pressure cooker for 25 minutes, and out came the most delicious, fall-of-the-bone wings just loaded with flavor. The family went wild!

I also made mushroom gravy (no flour) pork chops in 30 minutes in the pressure cooker – the gravy was so good my son ate in on top of some gluten free noodles the next day for lunch – and a breakfast meat loaf in the slow cooker, also a winner.

I am also using this to reheat food since we don’t use the microwave anymore and I’m finding that it seems easier and makes less of a mess than going stovetop.

That’s a pretty long review for a first-timer but I am so enthusiastic about this product that I just had to share.