A professor has filed a complaint with the Michigan Department of Civil Rights against Michigan State University because the taxpayer-funded school features a women’s study lounge in its main student union — in which male students may not trespass.

The professor is Mark Perry, a member of the economics faculty at the University of Michigan–Flint, about an hour down the road.

“The women’s study lounge is a gender-exclusionary space that blatantly discriminates against men,” Perry told The Daily Caller.

I would like to ask you to investigate gender discrimination against men at Michigan State University’s Women’s Lounge inside the Student Union. This is a publicly-funded/taxpayer-funded property that does NOT allow men to enter the Women’s Study Lounge. This seems like a clear violation of federal law according to Title IX, and a clear case of gender discrimination against men in a public space/accommodation.

The officially-sanctioned Michigan State women’s study lounge is located on the first floor of the Michigan State University Union — conveniently right next to a women’s bathroom.

The lounge is “prime real estate with window on two sides,” as Perry notes. It’s just under half the size of the University Union’s main lounge across the hall, which does not discriminate based on gender. 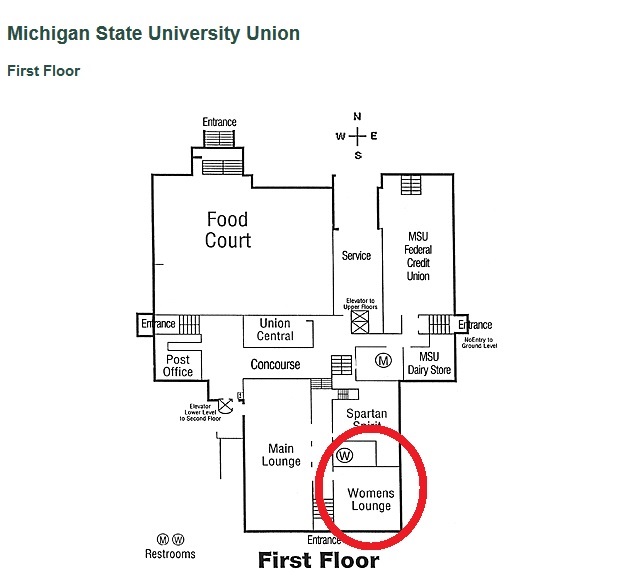 The space really is exclusively for women. “There are very few places on MSU’s campus that aren’t open to everyone, but one of them is the Women’s Lounge inside the Union,” The State News, Michigan State’s student newspaper, noted in a story about the lounge a few years ago.

That initiative, which passed by a popular vote of 58 percent to 42 percent, explicitly prohibits “the University of Michigan, Michigan State University” and every other state-funded educational institution from discriminating against or giving preferential treatment to “any individual or group on the basis of race, sex, color, ethnicity or national origin.”

Perry suggests that the women’s study lounge also runs afoul of Title IX, a comprehensive 1972 federal law that prohibits discrimination on the basis of biological sex.

Michigan State’s administration said it had no knowledge of Perry’s complaint.

“We do have a lounge at the MSU Union that has historically been used as a women’s study lounge, but as we continue to evaluate facilities and programs to ensure access for all students, plans are under way to convert the space,” Michigan State crisis communications manager Jason Cody told TheDC via email.

“The redesign and construction of the space is slated for completion in August 2016 and will include lactation space and a quiet study lounge that is open to all students,” Cody added.

Michigan State officials also would not say what is keeping the school from simply making the women’s study lounge accessible to everyone immediately.

“Michigan State University is currently conducting a review of the women’s study lounge as part of larger organizational changes occurring with the creation of the new Work Life Office and ensuing transition,” Norris replied.

The Michigan State University Union offers “friends, fun and entertainment,” according to the building’s website. It’s a “vibrant, multi-faceted building with flexible spaces, shopping, dining and entertainment” — “something for everyone.”

The University Union features a food court (with a pizzeria, a taco place, a sandwich place and a coffee shop), a federal credit union, a post office, a store that sells “delicious ice creams and cheeses,” bowling lanes, administrative offices, a sun porch and a fancy ballroom.

A Google map shows this impressive array of breastfeeding locations. According to the map, one of the current locations is, in fact, located in the University Union — in Room 332. That is — or has long been — the Michigan State Women’s Resource Center, which describes itself as “the first point of contact for women’s issues” at the taxpayer-funded school.

“Each room offers a clean, secure and private space for women who need to express breast milk during their time on campus.”

Perry told TheDC he is not optimistic about his Michigan Department of Civil Rights complaint.

“When they’ve been challenged on it, it hasn’t gone anywhere,” he told TheDC.

The Michigan Department of Civil Rights states that its mission is to “enforce civil rights law” throughout the state.