During a Wednesday interview with CBS, Cameron Sterling — Alton Sterling’s 15-year-old son — called for an end to anti-police rhetoric bandied by many racial activists.

“I really want everyone to know, everyone nationwide, everyone in this world to know that Alton Sterling was a good man,” Cameron stated. “No matter what anyone else has to say about him, truly in my heart, I know he was a good dad.”

Though he misses his father, Sterling still maintains that “in general, police aren’t bad.”

“I feel all police shouldn’t be punished for other police’s crimes,” he explained. “The police in Dallas, Texas they didn’t deserve that because nobody knew if they had kids to go home to. Those kids need their parents.” 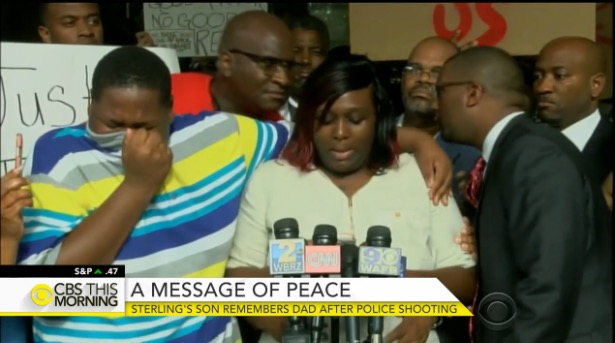 Alton Sterling’s son, Cameron stands next to his mother at a press conference. (CBS)

Sterling thinks it’s important for people to “continue protesting” police brutality, but to do it the “right way.”

“What I want, what I ask if you truly love my father, I truly just want everyone to protest the right way — protesting in peace. Not in violence. Not beating the police, not police beating the people. That makes no sense. That make things worse. You have to make things better by making peace.”