NBC Congressional Correspondent Luke Russert has long been dogged for going to work for NBC News with no real prior broadcasting experience. He rose to Washington fame on the heels of his dead father, Tim Russert, the famed host of NBC “Meet the Press,” who passed after a sudden heart attack in the summer of 2008.

On Wednesday, Russert announced that he’s quitting his job to “pursue other endeavors.” At 30, he said, it’s time to reflect on where he wants his life to go from here.

“Bit of personal news,” he announced on Twitter this morning.

Without much warning, Russert’s last day at the network is Friday.

“It has been a privilege and an honor for me to have worked for NBC News for the last eight years,” he said in a statement “I will always be eternally grateful for all the opportunities I’ve received and for the incredible people I’ve gotten to know along the way. NBC News is family and while it’s hard to leave, it’s the right decision or me at this time.”

“It’s fair to say my broadcast career began in an usual way after college graduation and the death of my father. As a result, I threw myself into the work and never took time to reflect, to travel and to experience many things that would have given me a clearer sense of what my future should be. Now at 30, I look forward to taking some time away from political reporting and focusing my efforts on other endeavors that I’ve long wanted to pursue.”

Pause: SERIOUSLY — he’s leaving smack in the middle of what is clearly the weirdest, most dramatic presidential elections since he’s been born?

“My colleagues at NBC not only helped me grow as a journalist but as a person,” he continued. “They’re the best. NBC has all my gratitude and will continue to excel during this election season. Of course, the viewers should also know how much I appreciated their confidence in me. Thank you.”

In another unusual move in recent weeks, Russert declined to participate in a Kennedy Center roasting of one of his father’s close friends, James Carville.

Russert was a no show.

Good news for Russert — the statement gushed with praise for him and all the time he spent covering natural disasters, the Boston Bombings and more and declared, “He will always be part of our Peacock family.”

Much of the response has largely been positive, with colleagues wishing him well. 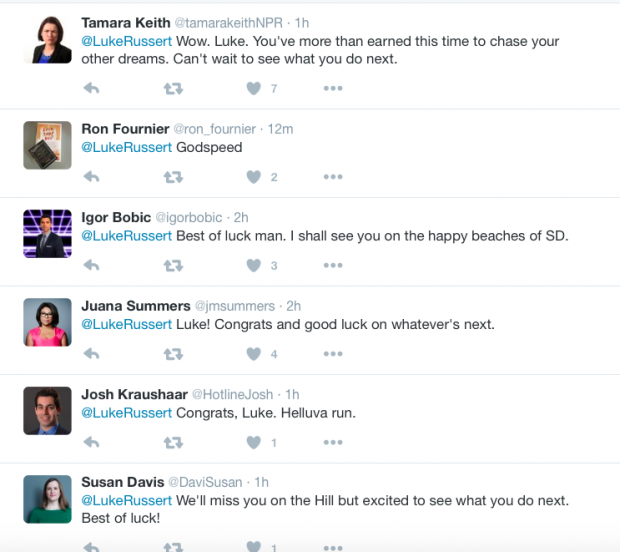 There was, of course, some nastiness.