I’m seeing some dumb headlines this morning, and they reflect something I’ve been seeing for a while, so I figure it’s time to make a no-doubt-futile effort to address it.

This is incorrect, James Arkin at Real Clear Politics: 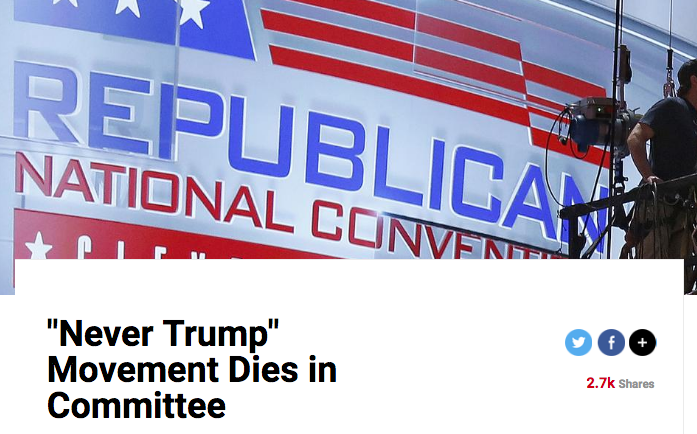 And this is incorrect, Ed O’Keefe at the Washington Post:

And all other examples of this formulation are incorrect: “#NeverTrump was a thing, but now it’s not because of something that happened in some RNC rules committee meeting.”

No. Wrong. That’s not what #NeverTrump means. Here’s what it means. Please pay close attention:

#NeverTrump means I am never voting for Donald Trump.

That’s it. That’s what it means, and that’s all it means. It’s not a movement, it’s a statement.

If the people trying to stop Trump’s nomination are saying #NeverTrump, that’s fine. But it’s not some movement they’re leading. Their failure doesn’t change what I’m going to do or not do on November 8.

I don’t blame them for trying, mind you. They’re on the side of the angels as far as I’m concerned. But it’s all in vain, because rules and laws don’t matter at this point. If Hillary Clinton can get away with flagrantly breaking the law because she’s too big to jail, then nobody’s going to allow a few silly rules to stop Trump. The decision has been made, and that’s that. The fix is in. But hey, I don’t blame them for trying.

And now that they’ve failed, which was probably inevitable, guess what? I’m still not voting for Trump. That’s what the word “Never” means. I’ll be #NeverTrump until the last day of his second term. Too bad, whiners. Deal with it.

It seems silly that I just had to explain what the word “Never” means to a bunch of adults. But then, this whole thing is silly. 2016 is silly. Silly is all we deserve, America.