CLEVELAND, Ohio — So much for host state favoritism. Ohio’s state delegation will not be seated in the front row at the Republican convention at the Quicken Loans Center this coming week.

Instead, the Buckeye State delegates will be seated in the second row from the podium, to the stage’s left wing, behind the Pennsylvania delegation.

Where is the massive Texas delegation? Toward the back of the convention floor with Wyoming, Kansas, Colorado, Puerto Rico, Delaware and Maine. 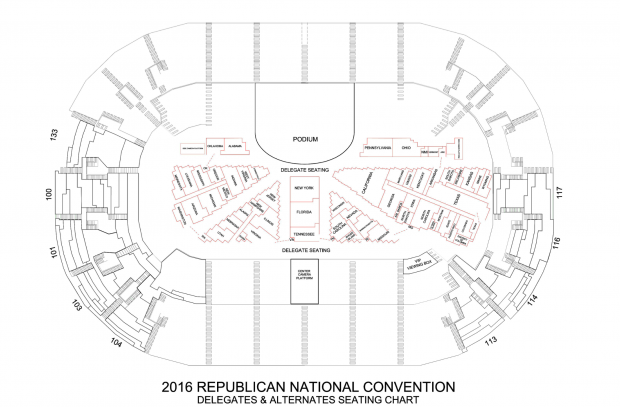 The Utah delegation is far up on the other side of the convention floor with Guam, Nebraska, Virginia, Arizona, Washington State, Michigan, and Minnesota. According to officials, 56 delegations will be seated at the convention.

“Conventions are a time that bring our party together in one space to reaffirm what we believe in and look to what the future will bring,” said convention CEO Jeff Larson in a statement. “Regardless of our home state and background, we come together as one body to select our nominee for President of the United States.”

Ohio Republican Gov. John Kasich, who refuses to endorse Donald Trump for the GOP nomination, is expected to be largely a no-show at the convention other than one reception on Tuesday at the Rock and Roll Hall of Fame.

1
Ben Shapiro Steps Down As The Daily Wire's Editor-In-Chief
Media
2
Ilhan Omar Calls For The 'Dismantling' Of US Economy, Political System
Politics
3
Trump Supporter Slapped In The Face During Fight At Black Lives Matter Plaza
Video
4
JONES: I Am Black And I Am A Democrat. But 'I Ain't' Voting For Joe Biden This November
Opinion
5
Ghislaine Maxwell Reportedly Has 'Secret' Video Footage Of Prince Andrew
US