The unclassified 28 pages of the 9/11 report reveal that the FBI and CIA had evidence connecting Saudi Prince Bandar bin Sultan, nicknamed Bandar Bush, to al-Qaida and men close to the 9/11 hijackers.

The report shows that bin Sultan was most closely connected to Osama Bassnan, a suspected Saudi intelligence agent who was close to 9/11 hijackers.

The report states that “[Bassnan] and his wife have received financial support from the Saudi Ambassador to the United States and his wife.” “According to the FBI, on May 14, 1998, Bassnan cashed a check from Bandar in the amount of $15,000.”

The report found that Bassnan had been in contact with 9/11 hijackers Khalid al-Mihdhar and Nawaf al-Hazmi, and suspected Saudi intelligence agent and terrorist supporter Omar al-Bayoumi.

“FBI files suggest that al-Bayoumi provided substantial assistance to hijackers Khalid al-Mihdhar and Nawaf al-Hazmi after they arrived in San Diego in February 2000,” the documents of the joint Senate and congressional report on 9/11 state. The report also says that al-Bayoumi had a received a monthly salary from a company the FBI believed “had ties to Usama Bin Laden and al-Qa’ida.”

The report states Bassnan “made a comment that he did more than al-Bayoumi did for the hijackers.”

Prince Bandar was the Saudi ambassador to the United States from 1983 to 2005. He is known for close relationships with Presidents Jimmy Carter, Ronald Reagan, George H.W Bush, Bill Clinton and George W. Bush.

He was especially close with George W. Bush. A New York Times article from 2007 states: “No foreign diplomat has been closer or had more access to President Bush, his family and his administration than the magnetic and fabulously wealthy Prince Bandar bin Sultan of Saudi Arabia.”

Prince Bandar has previously said about the now declassified 28 pages: “Saudi Arabia has nothing to hide. … We can deal with questions in public, but we cannot respond to blank pages.”

The former ambassador is also heavily involved in current efforts to fund and arm Syrian rebels. 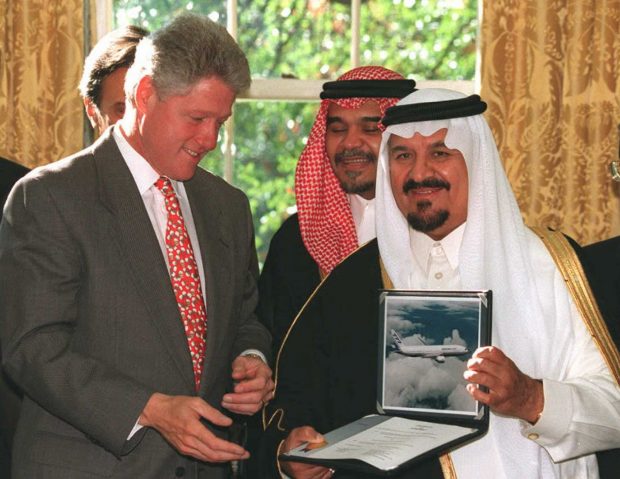 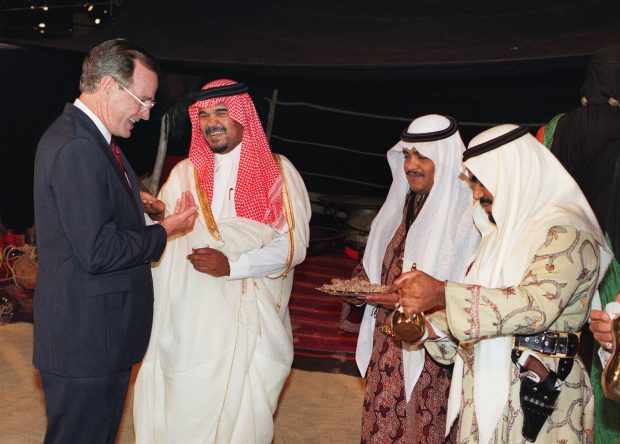 The financial support documented in the report is from both Prince Bandar and his wife Haifa bint Faisal.

According to the documents, his wife gave a monthly stipend to Osama Bassnan’s wife. “In a recent search of Bassnan’s residence, the FBI located copies of 31 cashiers checks totaling $74,000, during the period February 22, 1999 to May 30, 2002.”

According to the 9/11 report, “in 1993 the FBI became aware Bassnan hosted a party for the Blind Shaykh at his house in Washington, DC in October 1992.” The Blind Shikh is currently serving a life sentence for his involvement in planning a terrorist attack.

“Bassnan also stated to an FBI asset that he heard that the U.S Government had stopped approving visas for foreign students. He considered such measures to be insufficient as there are already enough Muslims in the United States to destroy the United States and make it an Islamic state within ten to fifteen years.”

The report also states “the “FBI confirmed” that “al-Bayoumi’s wife attempted to deposit three of the checks from Prince Bandar’s wife, which were payable to Bassnan’s wife, into her own accounts.” Ambassador Bandar never gave money directly to al-Bayoumi.

In October 2002, then-FBI assistant executive director Pasquale D’Amruo testified in a closed hearing about Bandar’s wife’s financial activities. “She gives money to a lot of different groups and people from around the world. We’ve been able to uncover a number of these…but maybe if we can discover that she gives to 20 different radical groups, well, gee, maybe there’s a pattern here.”

The report also found that senior al-Qaida member Abu Zubaida’ phonebook, obtained by U.S and coalition forces, contained a phone number “unlisted and subscribed to by the ASPCOL Corporation in Aspen, Colorado.”

“According to the FBI’s Denver Office, ASPCOL is the umbrella corporation that manages the affairs of the Colorado residence of Prince Bandar,” the report states.

The report also states that an another terrorist suspect with a redacted name’s “number was also linked to ASPCOL.” The documents go on to say, “the CIA traces have revealed no direct (emphasis added) links between numbers found in Zubaida’s phone book and numbers in the United States.”

When the Denver FBI office investigated ASPCOL “they believed any inquiries regarding ASPCOL would be quickly known by Prince Bandar’s employees. Due to the sensitivity of this matter, they decided to hold their investigation of ASPCOL in abeyance until they received additional guidance from FBI headquarters.”