A Youtube account operated by Gavin Eugene Long and discovered by The Daily Caller reveals key insight into what might have motivated the 29-year-old black man who killed three Baton Rouge police officers Sunday morning.

Videos on Long’s account show that he was a former Nation of Islam member. He also ranted against “crackers” and made references to Alton Sterling, the black man killed by police in Baton Rouge on July 5.

Other information about Long shows that the Kansas City native, who CBS reported was honorably discharged from the Marines in 2010, went by the name Cosmo Ausar Setepenra.

In one video filmed from Houston and posted to Long’s Youtube account on July 12, the suspected gunman discusses being in the Marines and reaching the rank of E-5.

“If I would have been there with Alton — clap,” Long says in a video posted on July 14.

In the video, Long met with several men he seemed to not have known prior to their encounter. He promotes a book he wrote and discusses black liberation ideology.

“I wrote it for my dark-skinned brothers,” Long said of his book.

“If you look at all the rebels like Black Panthers, Huey P. Newton, Malcolm X…Elijah Muhammad, they was light-skinned. But we know how hard y’all got it,” Long continued.

Phone numbers on buildings in the video show that it was filmed in Baton Rouge. Calls placed to the numbers were not answered because they were out of service.

“I just got here I’m not really into the protesting. I do education because that’s our real freedom,” he is heard telling two men in the video.

He called protesting “emotional” and “for the women.”

In the video Long is heard lamented “working for the white people.” He encouraged one man riding in his vehicle as he filmed using a body camera to shop only at black-owned businesses. He brought up a hypothetical scenario in which a family member who wanted to buy carpet was forced to buy from non-black business owners.

“Who’s she going to fuck with? The cracker, the Arab, the Chinese,” Long says in the video.

“These Arabs, these Indians, they don’t give two fucks about us.”

Law enforcement officials said Sunday that the shooting does not appear to have been race-related. At least one of the officers killed in the attack was black. Officials are still investigating whether Long acted alone. Initial reports said that three men may have been involved.

Long also appears to have been in Dallas in the days after Micah X. Johnson killed five police officers during protests there earlier this month. Like Long, Johnson had also served in the military and was affiliated with the radical black liberation movement. 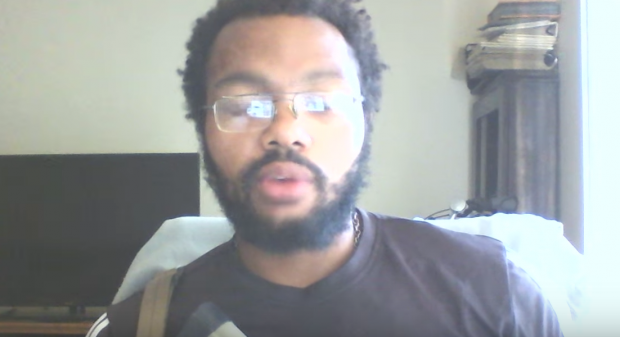 “If I’m peaceful protesting…I know they would try to arrest me, and I would die right there because you’re not going to kidnap me. I know my rights, but I stand on my rights. That’s what separates me, that’s why they’re afraid of me,” he says in his video from Dallas.

In other recordings Long analyzed the case of Sandra Bland, the black woman who was arrested by a Texas highway patrolman last year and killed herself in jail three days later.

Another video on Long’s Youtube account is of a man named Myron May discussing a conspiracy theory called gang-stalking.

People who believe they are victims of gang-stalking — they call themselves “targeted individuals” — believe that groups of government agents are tracking them at all times and attempting to manipulate their actions.

In Nov. 2014 May shot three people at the Florida State University library before being fatally shot by police. It was later revealed that May, who was black, believed that he was being stalked by government agents.

Long believed he was also a “targeted individual.” In one Internet posting discussing gang-stalking, Long offered what he said were solutions for people who believed they were victims of gangstalking.

2. Before you move into neighborhood, put every house on notice to what gang stalking is with link’s to websites & videos & program names. And Let them know your situation, standing & your philosophy on life

3. Start telling the companies’s, worker’s, & managers & owners that we are going to expose your involvement and rate your poor performances & games on the internet on sites like Yelp, Google Map’s & the Yellow Pages etc. as horrible service & accessories to Gang Stalking. (Not only will this spread the word to others who view the businesses, but will inform fellow T.I.s as well)

Long, who operated a self-motivation website called “Convos with Cosmo,” also appears to have tweeted hours before the attack unfolded.

In one video posted in recent weeks, Long left a cryptic message that may have foretold Sunday’s attack. And though he said he was once a member of the Nation of Islam, the radical sect led by Louis Farrakhan, Long also said that he had no affiliations with outside groups. (RELATED: Former Prosecutor Sues Obama, Al Sharpton For Inciting A Race War)

“I thought my own thoughts. I made my own decisions. I’m the one who’s got to listen the judgement. That’s it. And my heart is pure,” he said.

“If anything happens with me, because I’m an alpha male, I stand up, I stand firm, I stand for mine, until the end,” he said.

Law enforcement officials have reportedly said that Long was a member of a sovereign citizen movement. The Wall Street Journal reported that he was a member of a group called the New Freedom Group. There are no references to the group online.