INDEPENDENCE, Ohio — A Frank Luntz focus group of 27 undecided moderate voters convened Sunday in an ugly office park studio to answer a question most refused to answer: Who are they voting for? Many emerged more confused, utterly exhausted and beaten down after three hours of answering Luntz’s relentless questions, watching campaign ads and turning his dials than they were before the whole thing began.

On a positive note, the cuisine was a bulimic’s paradise.

They had most snack foods known to mankind: six different kinds of popcorn, two flavors of kale chips, M&M’s (plain and peanut), Reese’s Pieces, a few types of chocolate chips, dried cranberries, gummy bears, chocolate bars, chocolate candies wrapped in fancy wrappers, coconut flakes, dried cranberries and I’m getting sick rattling off all these foods. But there was more — a gigantic fruit platter that included cantaloupe, strawberries, blueberries and pineapples. A carrot, cucumber and celery tray. For more hearty eaters, there were sandwich wraps. To wash it all down there was wine, coffee, tea and bottle after bottle of Fiji water. 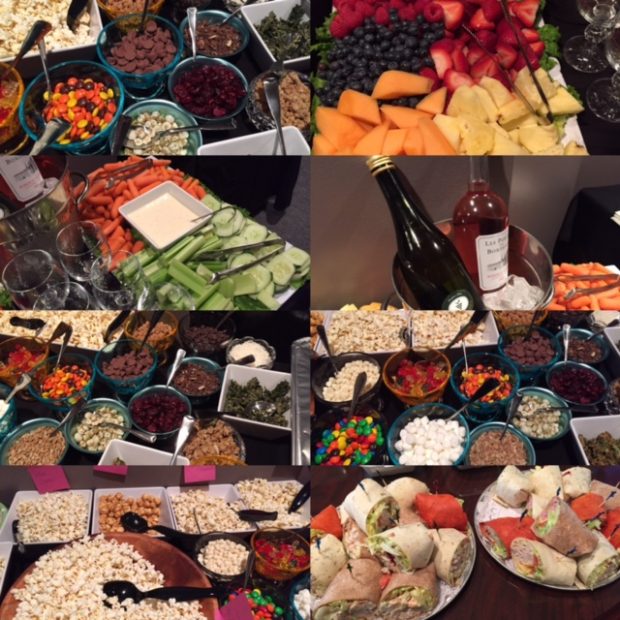 If that wasn’t enough to put participants at ease, there was Luntz. An orchestra conductor, drill sergeant and Nazi guard rolled into one, Luntz looked sloppy in an extra large bright green striped golf shirt over baggy black trousers and his signature big sneakers — these were red, white and black. While his look is unkempt and his hair had tiny beads of moisture at the ends, his process is absolutely flawless and he’s a total control freak.

When I asked if I could observe his voters — not even talk to them, just sit in their midst and watch them — before the group began, his answer was a big fat no.

A room of observers included GOP consultant and CNN contributor Alex Castellanos (a Trump supporter) and reporters from the AP and The Plain Dealer. We sat in a room with a two-way mirror. We could see the participants, but they could not see us. Much of the time we were looking directly at Luntz’s ass. But it was a great way to get acquainted with the characters in the room without them feeling too self-conscious about being watched so intensely.

A Frank Luntz focus group comes in all shapes and sizes — there’s the bald fat guy with glasses, the black woman in a pretty deep pink frock, the twentysomething young woman who doesn’t watch TV, the older short woman who is a diehard Hillary Clinton supporter, an outspoken military vet, the articulate brunette in the back and the plump older white staunch anti-Donald Trump Republican male in the front row. 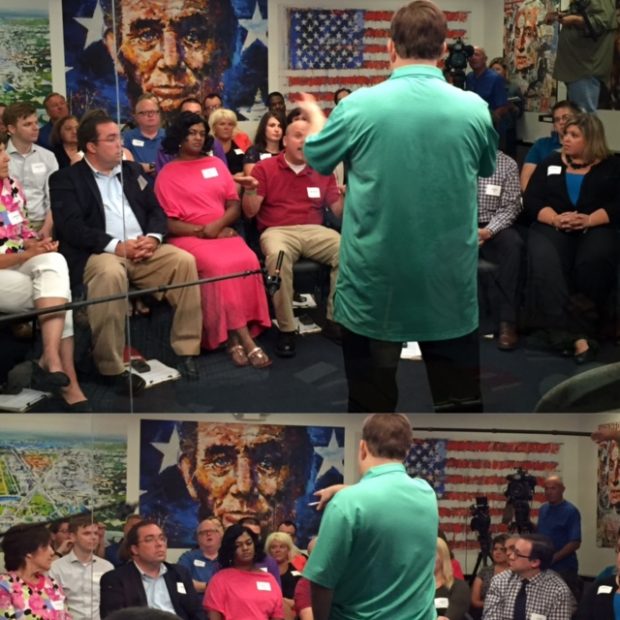 Luntz immediately puts those around him at ease in a Luntz sort of way. Some even wanted his autograph.

The lights are so bright, he says, “I’ll be sunburned by the end of this,” he confides to his subjects.

When they please him, he lets them know.

When they annoy him — a soundbite that’s too long or they don’t talk enough — he lets them know that, too. When he’s displeased, he says things like “I can’t use that,” or “In the weeds,” or “too long.”

Castellanos tells The Mirror, “I think he has a gift for listening and for drawing something from the depths of people. I think you saw the race [here]. It’s scary change or no change.”

Luntz returns the affection in Luntzian fashion: “I’ve known him since I was thin — for 36 years. Most marriages don’t last that long.”

Here’s a sampling of what the participants shared:

“Nobody fact checks the outrageous statements they make.”

“I’m frustrated and a little disappointed because I don’t really trust either of the candidates.”

“Trump just scares me. I don’t trust the rhetoric that comes out of his mouth.”

Sometimes the participants fought one another.

A man exclaimed, “Bernie speaks from his heart.”

But the dirty blonde in the front row wasn’t buying it. “But a heart isn’t going to solve the problems of this country,” she snapped.

At least in this focus group, ex-hopeful Bernie Sanders is still in the picture.

As trust goes, he wins hands down, Trump comes in second, Clinton in third with 15 participants considering Gary Johnson.

At this point Luntz orders his class to shout out a word or phrase that describes Trump.

If Trump failed that test, Clinton undoubtedly did too.

Luntz’s conclusion: “So Trump is hate and Clinton’s a liar.”

There were certain no-brainers.

“Is the political system broken?” All 27 hands went straight up.

But other issues stumped them. Like Trump’s VP pick Mike Pence.

“He’s not going to be able to deal with Trump, who’s crazy,” said the woman in pink, rolling her eyes.

“I would have happily voted for Bernie Sanders.”

As we’re all intensely listening to what’s being said, an organizer popped her head into the room to shout that “THE FOOD WILL BE REMOVED SOON.” WTF? SHHHHHHH. Who cares about the food????!!! In another instance, someone else came in to irritatingly announce that Luntz would SOON BE AVAILABLE FOR QUESTIONS if we had any.

“He seems very stable. I like how quiet he is.”

“I just think Hillary is going to bring the same people in as Obama and nothing is going to get done.”

Just then a man in the back refers to Hillary as a man.

“She is a deeply corrupt person. That is a syndicate with the Clintons.

“Security 101,” says the bald fat guy with glasses. “You don’t put your server in your basement.”

“She just blatantly lied,” says the woman in pink.

Lots of groans and irritation flooded the room.

Luntz clasped his hands to his heart. “Everyone, let us pray,” he says to laughter.

The dirty blonde continues, “She is more concerned with herself.”

It’s time for a Luntz confessional: “I just want you to know you’re really depressing me. It’s like a divorce and you’re telling me the other [spouse] is horrible.”

Luntz sometimes lets them wander and linger on a topic. Other times he wants their responses NOW. He tells them there is only one place they can go for their news. Out with it.

But for these voters, it isn’t about where they get their news.

“It’s not about a lack of information; it’s a lack of choices,” a man says of the candidates.

Luntz asks, “What do you need to see or hear or feel to know Trump is worthy of your vote?”

Just then, the bald fat man with glasses provides a non-answer: “It’s all about me me me me me.”

And a man in the front row: “I will not vote for Donald Trump under any circumstances. Can’t do it with him. I just know I’m hashtag Never Trump. That’s me.”

The dirty blonde woman in the front row agreed, but is conflicted: “I do not like Donald Trump, but I REALLY do not like Hillary Clinton.”

He asks, “Which candidate would you rather have in a time of tragedy?”

A 25-year-old guy says, “I couldn’t see her congratulating herself after a shooting.” (An indirect reference to Trump, who did this.)

One man stood out in the crowd — at least for Luntz.

“With Donald Trump it’s a box of chocolates. We may get something, we may get nothing,” he said, prompting a discussion of chocolate with caramel or cherry filling.

As usual, the media is on the level of a toilet with these people.

“Do you trust the media?” Luntz asked.

The collective answer: “NO!”

“Their one goal is to increase ad revenue.”

“The media are the ones who provided us with Donald Trump.”

“The media is not objective — they are giving you their narrative.”

And now the media word shit cloud — thanks, Luntz.

Luntz took a moment to take a stab at MSNBC, saying, “MSNBC, the only network with more letters in its name than viewers.”

The focus group drill sergeant could be lighthearted and funny. He could also treat his subjects like he was a prison guard, or worse.

“Turn your dials to the number of pounds of overweight I am,” he said to laughter. “By the way, when this is done I’m going to eat well.”

But back to serious matters: Do as he says. He had them repeat aloud, after him, how they were going to listen to ads and react to them to the best of their abilities.

“A little Hitleresque,” a female observer whispered to me.

To practice using the dials, Luntz said, “If you have an abortion or even think of it, you’ll go straight to jail.”

The observers broke into laughter.

Luntz came into the observer room every so often, it seemed, to vent.

“How’s it going?” someone asked as he entered our room.

Luntz emoted: “It’s depressing and I’m going to jump off a boat.”

One male participant got a little gory when trying to decide between Trump and Clinton. “If that’s the choice, gun to my head, pull the trigger.”

Luntz wasn’t having it. “That would be messy,” he replied.

During another visit to the observer room, when the three-hour ordeal was nearly over, Luntz had a nervous, excited energy.

Luntz asked us if we wanted to question his subjects. He said any of us could come in for one question. “Brian” from the focus group facility had a question and went in and stood before the participants. But before he could ask, Luntz kicked him out. “You’re from the facility?” Luntz asked incredulously as if he was subhuman. Like why in the hell should he get a question?

In the end, Luntz asked his subjects to admit if their views changed in any way since arriving there. Eight hands shot up. One woman who raised her hand was soon rightfully shamed — especially since she had spent the entire day praising Hillary.

All the other hands rose.

On her way out, Carolyn Brichacek, a Parma resident, told The Mirror she had fun, but admitted that she felt exhausted, overwhelmed, and still doesn’t know who she’s voting for. “I was kind of quiet in there,” she said. “My feeling is that our political system is so broken. I don’t feel myself any closer to making a decision. I can’t, in good conscience, vote for either.”

1
Black Firefighter Spent His Life Savings To Open A Bar. Then Minneapolis Looters Burned It Down
US
2
'Begins With F And It Ends With U': Chicago Mayor's 'Code' For Trump Leaves Little To The Imagination
US
3
'F*** Fox News!': Protesters Chase Fox News Reporter Outside White House
US
4
Tucker Laments Double Standard: 'Normal' People Must Follow 'Countless New Rules,' Rioters 'Get To Ignore' Them
Media
5
Owner Of Gutted Minneapolis Shopping Mall Tells Governor And Mayor: ‘People Will Uprise’ Over Riots And Looting
US