Black Lives Matter advocates have been served with a lawsuit accusing them of inciting a race war, but defendant Al Sharpton says he has tried to preach a message of peace between blacks, whites and police officers.

“There is substantial public record of me denouncing violence, a race war, and even supporting police,” Sharpton told the Daily Caller Wednesday. “I have even been giving money to police killed by violence.”

He was referring to the 2015 shooting death of Harlem police officer Rudolph Holder. A year earlier, two New York City officers were gunned down as they sat in their patrol car eating lunch by an assailant who said on Instagram he was seeking revenge for the deaths of Michael Brown and Eric Garner at the hands of police.

Sharpton said he had called for peace after deaths of the two black men. When asked about recent police assassinations in Dallas and Baton Rouge by suspects who were followers of Black Lives Matter and the Nation of Islam, Sharpton said, “What does that have to do with me?”

The lawsuit accuses him of leading marches that stir up unrest and violence, including one in New York that called for the death of police days before the officers were shot.

A video shows a process server attempting to give Sharpton the lawsuit but the reverend instead got into the back of town car while body guards dropped the package on the ground. Sharpton said he didn’t realize he was being served.

A class action lawsuit was filed Saturday naming civil rights leader Sharpton, Nation of Islam leader Louis Farrakhan, President Obama, former Attorney General Eric Holder, Black Lives Matter leader DeRay McKesson and four BLM founders. It accused the defendants of inciting violence “with the fiction that police officers and other law enforcement are intentionally and systematically targeting and hunting blacks and other minorities to kill them for no reason other than racism or sport.”

The suit was filed by former federal prosecutor Larry Klayman on behalf of police officers in response to five Dallas police assassinations by a man aligned with a “black power” movement.

Holder tried to thwart service by dropping the documents to the ground after they were handed to him at his Washington, D.C. home, Klayman said. However McKesson seemed to wear the lawsuit as a badge of honor, posing for a photograph with the process server in front of his Baltimore home. Farrakhan received his documents through a third party at his Michigan home and President Obama was served through the mail, which is standard protocol. Four other BLM leaders were in the process of being served Wednesday. 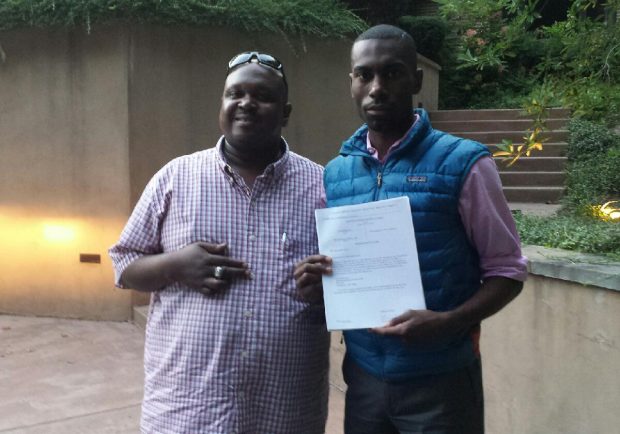 “These are the brave gladiators of the radical black movement,” Klayman said. “They believe and act as if they are above the law, they don’t recognize the courts or any legal process. But this time, they are going to be held legally accountable. Their time is up.”

Since the July 7 Dallas slayings, three more officers died in Baton Rouge on the heels of a BLM protest.

The Baton Rouge assailant was a Nation of Islam follower, according to his YouTube channel.

Klayman said it was ironic that defendants like Sharpton and Holder are willing to provoke harm against police and non-blacks, but accused them of shirking their responsibility of appearing in court.

“Here you have the former attorney general, the highest law enforcement officer in the nation and this is the respect he shows for our laws,” Klayman said.

Sharpton was served on Saturday after he held a 300-person rally at his Harlem office that was attended by the family of Eric Garner, who died because of a New York police chokehold in 2014. A march in Brooklyn followed the rally and Sharpton was on his way there when the server approached him on the video.

“We stop people because we don’t want personal complaints,” said Sharpton, adding that he receives dozens of requests every week from people with abuse cases pleading for help. “I went and got in my car. Some guy comes toward us, we don’t know who he was.”

Sharpton questioned why the server didn’t just go inside his office.

Klayman said the server, from SameDay Process, tried to go inside but wasn’t able to serve anyone and did identify himself before the tape started rolling.

“Just throw it there,” said a guard, who took the papers and threw them on the ground.

The other defendants did not respond to a request for comment.

Klayman was a U.S. Dept. of Justice prosecutor during the Reagan administration and then went on to form the conservative advocacy groups Judicial Watch and Freedom Watch.

Editor’s note: This story was originally published with an earlier draft that did not include Sharpton’s comments. It has been updated.