The day that Republican nominee Donald Trump was set to give a much-anticipated speech to close out the Republican National Convention, Facebook employees designated as one of the site’s “trending topics” a report about George W. Bush expressing dismay about Trump and the future of the Republican Party. But the story wasn’t new — it was two days old. 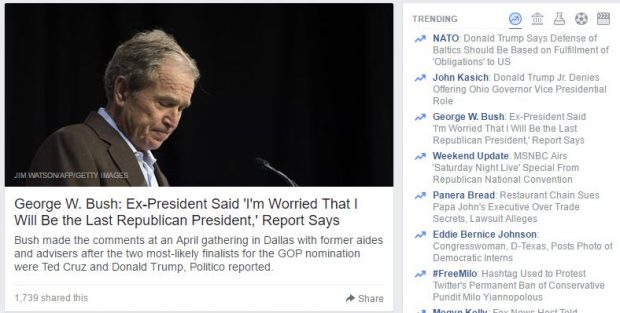 The story originated as a one-sentence quote attributed to the former president in a Politico Magazine story on Tuesday morning.

[dcquiz] “I’m worried that I will be the last Republican president,” Bush reportedly told advisers in mid-April when Trump and Sen. Ted Cruz were the only remaining candidates in the Republican primary.

A handful of others new outlets, including CNN and The Hill, covered the quote that same day, but it was largely drowned out by coverage of Melania Trump’s partially-plagiarized speech from the night before. And yet, on Tuesday, the story was among Facebook’s trending topics accompanied by a sad-looking picture of the 43rd president.

The story can be seen in screenshots of Facebook’s trending topics uploaded to Twitter Thursday morning and remained through 3:41 p.m. Eastern time, when The Daily Caller captured the screenshot above.

Facebook has long faced accusations of liberal bias — accusations that only increased in May when several former employees told Gizmodo that the company’s employees routinely elevated liberal causes like Black Lives Matter while suppressing conservative news. Internal documents leaked to The Guardian that same month revealed that Facebook employees — not algorithms — decide what does and doesn’t make the trending topics list.

TheDC reached out to Facebook to ask why, just hours before a crucial speech by the Republican nominee, the company chose to resurrect as “trending” a two-day-old story portraying that nominee in a negative light. By press time, Facebook had not yet replied.