Lying in his cot after a night of guard duty under the Afghan stars, US Army Staff Sergeant AJ Glassford awoke to the sound of an email from his wife, who had just sent pictures from back home. Drained from his late shift, Glassford decided to browse the photos after getting a few hours of sleep.

By then, July 7 of 2013, the seasoned infantryman was on his second tour in Afghanistan and knew not to waste an opportunity to rest. His company spent months tirelessly patrolling the Chamkani district in Afghanistan’s Paktia province, just eight kilometers from the Pakistani border.

Being in close proximity to Afghanistan’s eastern neighbor meant that local fighters were well funded by sponsors in the Pakistani government. (RELATED: Experts Say Turkey Could Be The Next Pakistan)

The region is no stranger to violence. In the late 1980s the Mujahideen in Paktia clashed with Soviet troops during the invasion. It became a hotbed again after coalition forces launched Operation Enduring Freedom, battling the Taliban throughout the steep mountainsides. 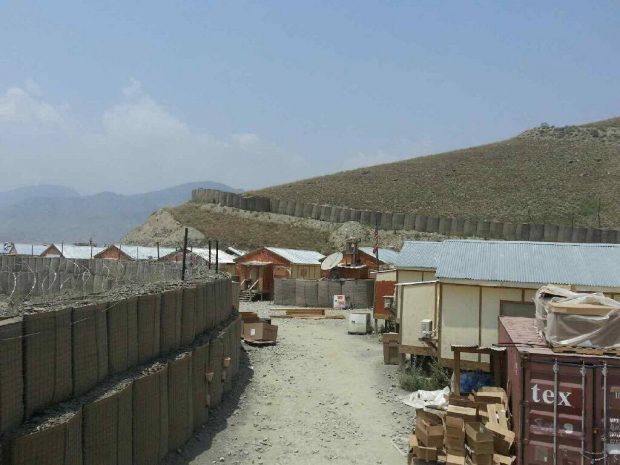 Nestled halfway up a mountain was Combat Outpost Chamkani, where Glassford laid his head. He rolled over and closed his eyes just in time for another interruption.

“I heard a loud freight train type of sound out of nowhere and then I heard a blast,” he told The Daily Caller.

A 107mm rocket came screaming through his shack, detonating its charge on a rafter and showering shrapnel into the room. But the warhead itself delivered the most menacing blow.

The rocket head tore through Spc. King — another soldier in Glassford’s squad who was in bed asleep — severing a wound between the bellybutton and hip, fortunately missing any organs. The warhead continued below King’s bunk tearing directly through Sgt. Page’s pillow. The near miss left Page with a shattered arm that would later be considered for amputation.

As everyone rushed out, Glassford laid still, unconscious.

“I woke up to sharp pains in my leg that felt like I was being burned with a lighter, I looked around and my building was a cloud of smoke and complete destruction.” 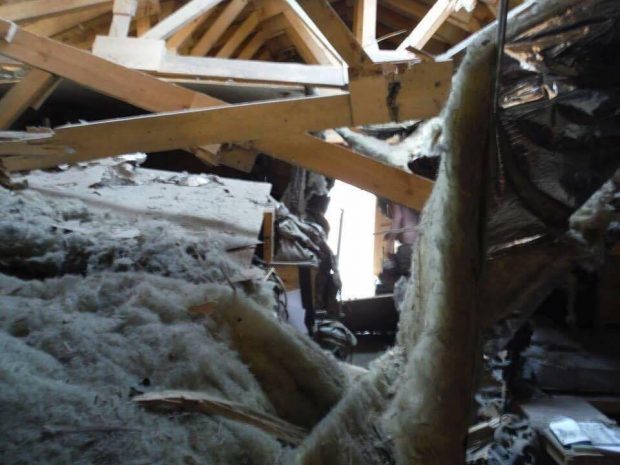 A fireteam leader, Glassford’s first reaction was to locate his soldiers, but no one was in sight.

Barefoot, he made his way for the door, but not before removing a piece of wood about the size of a sharpie lodged into his ankle.

“As I walked, my feet were getting burned by the hot metal shrapnel across the floor,” he said.

Outside, he stumbled into the chaos of another rocket striking just north of the COP and leadership scrambling to evacuate each shack. He hurried to get accountability of his soldiers who were taking cover in a bunker.

Glassford found his team but was told one of his soldiers was being treated in the med station. After his squad leader noticed that Glassford himself was injured, he was told to stop helping and was sent to the medics.

“When I got in there, half of my platoon was bleeding out and fucked up so I tried to help until I was told that I needed to get patched up.”

He was treated for shrapnel and wood lodged into his leg and ankle, along with the burns on his feet.

But because the charge detonated in the rafters and not on the ground, all of the soldiers survived.

Sgt. Page, the soldier whose pillow was hit by the warhead, “kept his arm and [was almost amputated] at the shoulder but was able to keep it,” Glassford said, adding that Page’s arm is now held together with rods.

Sgt. Grasso “had three soda can sized holes in his back, and his arm was broken in more places than I can count.” Sgt. Glossup had a piece of shrapnel “in his ass, close to his rectum.” 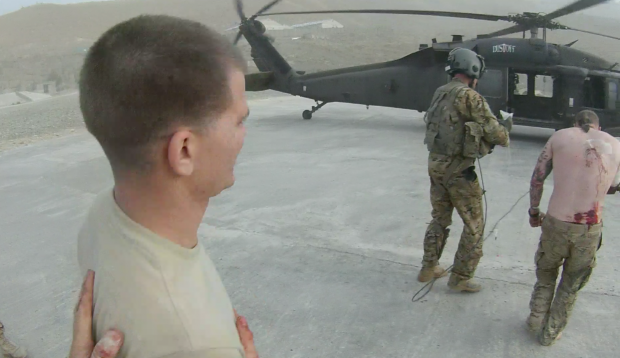 Ssg. Glassford waits behind Sgt. Grasso, whose arm is in a makeshift sling and lower back bares open wounds (photo: via Spc. Morgan’s helmet cam).

Spc. King, despite taking the warhead to his gut, lived and is still in the Army. Ssg. Bangfield took shrapnel to his arm. Specialist Gregory was peppered in the back. The medic, Specialist Morgan, was blasted in his waist but continued to treat the wounded. 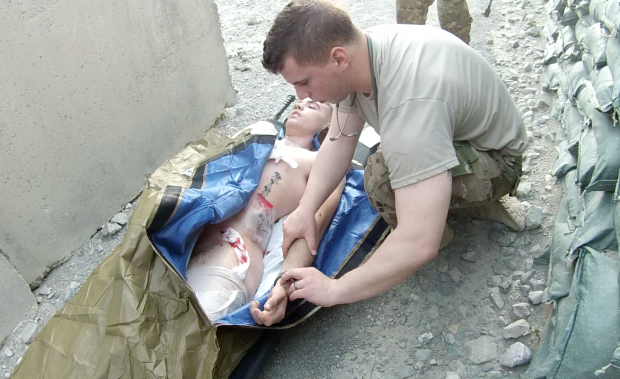 After a dose of ketamine, Spc. King is prepped for medivac. A medical dressing is taped over the wound (photo: via Spc. Morgan’s helmet cam).

Every soldier who was hit suffered a traumatic brain injury, and those who took shrapnel still have pieces inside their bodies today.

Three years later, the once tightly knit group that ate together, slept together and survived a rocket attack together, is now spread out living their lives apart.

Some, including Glassford, are still serving. Others left the Army and started a new life in the civilian world.

When asked how they celebrated their three-year near death anniversary, Glassford said they simply joked through texts and Facebook about how they all should be dead.

Note: Dan Chaison served with AJ Glassford on a separate deployment to Afghanistan in 2010.