“I like hearing CNN’s Fareed Zakaria ask in a thick Indian accent, ‘What kind of America do we want to return to?'”

John Nolte is a former editor at Breitbart News. He resigned amidst the whole Corey Lewandowski-Michelle Fields debacle back in March. Glenn Thrush is a reporter and podcaster for Politico.

NOLTE: “@politico feeds questions to Chelsea. Sends stories to the DNC for their okay. What the hell more do you need to know? …Man up, Glenn. …Why was it sent for approval. Why is Chelsea fed questions in advance. Hack outfit.”

NOLTE: “Hi @GlennThrush Any comment on your employer offering to feed Chelsea questions and having the DNC approve stories?”

THRUSH: “@NolteNC I’m proud of POLITICO… And u are not someone I consider a fair arbiter — even though I like you and your prose style. Cheers.”

“Don’t understand why it’s so bad to let a source see story, as long as you only fix errors & otherwise stand firm.” — liberal writer Mickey Kaus.

Nate Silver gets called on the carpet

“Well, you also spent the last year telling the world that your data showed he had no chance of winning. So there’rs that.” — The Daily Caller editor Peter Hasson, reacting to 538’s Nate Silver, who wrote, “Don’t think people are really grasping how plausible it is that Trump could become president. It’s a close election right now.”

Reporter hears ‘lock her up’ from Bernie fans

“Lest anyone think ‘lock her up’ is some sort of Republican phenomenon, there are plenty of Bernie supporters at this rally chanting it.” — WSJ‘s Byron Tau.

Fighting breaks out at a Florida DNC breakfast with Debbie Downer

“Some started chanting ‘Shame on you!’ Another man screamed, ‘We are not cool with this!’ Supporters of [Debbie] Wasserman Schultz tried to counter with a cheer of ‘Debbie!,’ but they were quickly overwhelmed as the protesters gravitated closer to the stage. ‘I want to listen!,; complained one woman to the agitators drowning out the chair. ‘Calm down!,’ another implored. ‘What do you want, President Trump?,’ a Schultz supporter asked a demonstrator.” — a story by U.S. News & World Report‘s Dave Catanese. Read the full story here.

Female journalist washes her hair after the RNC

“My hair is clean for the first time in a week and it’s making me feel more optimistic about America, although that surely won’t last.” — Anna Merlan, senior reporter, Jezebel.

JUST ASKING QUESTIONS: Should a Jewish pol be outed?

“I think I can prove that a major political figure is Jewish by ethnicity and may have been hiding it. Is it wrong to out them?” — GotNews‘ Charles C. Johnson.

“PARALLELS: Tim Kaine and Mike Pence are two of the most gracious, polite politicians I’ve ever covered.” — MSNBC’s Kasie Hunt.

Leslie Jones returns to Twitter after leaving in tears

“Welp…a bitch thought she could stay away. But who else is gonna live tweet Game of Thrones!!” — SNL’s Leslie Jones, who left Twitter for about 5 minutes after Breitbart News‘ Milo Yiannopoulos wrote some critiques of her movie and retweeted some fake racist screen shots that Jones hadn’t written. Yiannopoulos has since been thrown off Twitter.

“Believe it or not Jamie Weinstein actually did damage my arm when he attacked me this past week. I have to get an MRI for a tissue tear. The irony isn’t lost on me.” — GotNews‘ Charles C. Johnson, who accosted Daily Caller‘s Weinstein and his fiancé at the RNC. From the video, the incident appeared to be unprovoked.

CNN’s Tapper apologizes for one of his staffers

“Earlier tonight one of my great staffers made a mistake, putting a title on a tweet that was incorrect. We have fixed it and I apologize.” — Jake Tapper, CNN’s host of “The Lead.”

Pictures from the DNC in Philly

Where they work: Larry O’Connor works for HotAir and is a radio host for WMAL. Jake Tapper is an anchor at CNN. Jonathan Karl is a correspondent for ABC. 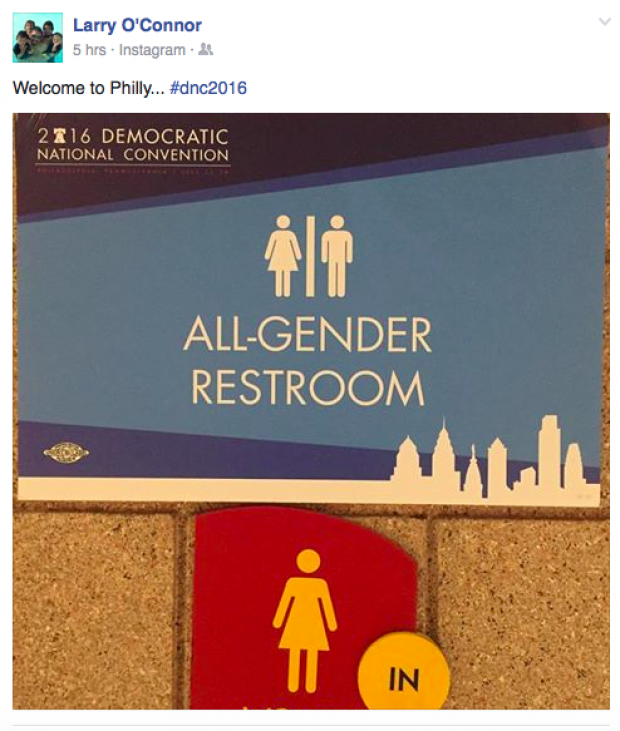 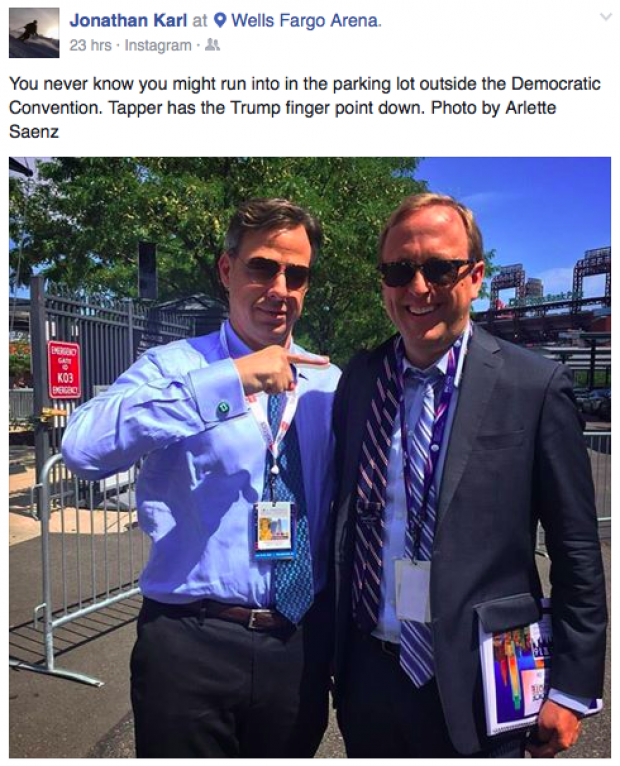