Michelle Obama said Hillary Clinton is the only candidate in this election who she trusts to be president. 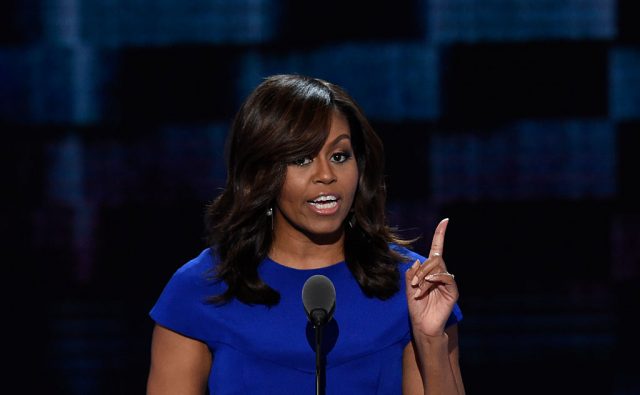 “Thank you so much,” Michelle said. “It’s hard to believe that it’s been eight years since I first came to this convention. Remember how last time I told you about my husband’s character and conviction? The traits we’ve seen every day in the White House? I also told you about our daughters — how they are the heart of our hearts.”

Obama said she worries about what her children will learn from the next president.

“How do we insist that the hateful language they hear from public figures on tv does not represent the true spirit of this country? How do we explain that when someone is cruel, you don’t stoop to the level of the bully? That when they go low, we go high. With every word we utter, every action we take, we know our kids are watching us.”

“We know our words and actions matter, not just to our girls, but to kids across the country,” she said. “Kids, like the little black boy who looked at my husband with wonder and said, ‘Is my hair like yours?'” 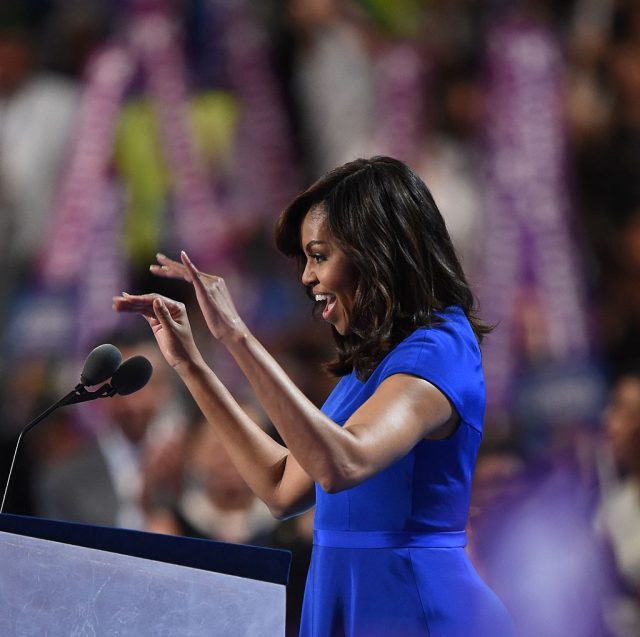 “See, I trust Hillary to lead this country because I’ve seen her lifelong devotion to this nation’s children — not just her own daughter who she has raised to perfection — but every child who needs a champion.”

“When she didn’t win the election eight years ago, she didn’t get angry or disillusioned. Hillary did not pack up and go home. As a true public servant, Hillary knows this is so much bigger than her own desires and disappointments. So she proudly stepped up to serve our country once again.”

“There were plenty of moments when she could have decided this was too hard. The price of public service too high. But here’s the thing: what I admire most about Hillary is that she never buckles under pressure. She never takes the easy way out. Hillary Clinton has never quit anything in her life.”

“When I think about the kind of president I want for my girls, that’s what I want.”

Then Obama took a shot at Donald Trump, without even saying his name.

“When you have the nuclear codes at you fingertips and military at your command, you can’t make snap decisions,” she said. “You can’t have thin skin or a tendency to lash out. You need to be steady and well-informed. I want a president with a record of public service, someone who’s life work shows our children we don’t chase fame and fortune for ourselves.”

“I want a president who will teach our children that everyone in this country matters.” (RELATED: Melania Takes A Shot At Hillary: ‘My Husband Will Never Be Bought’) 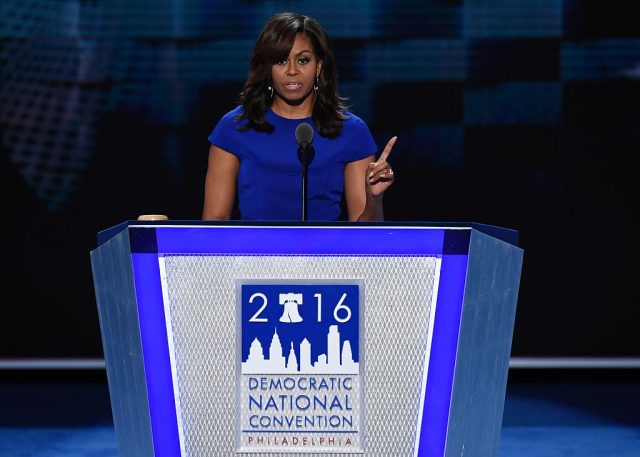 “In this election, I’m with her. Hillary Clinton has the guts and grace to keep coming back to put those cracks in the glass ceiling. That is the story of this country.”

“I wake up every morning in a house that was built by slaves, and I watch my two black daughters playing with their dogs on the White House lawn,” she said. “Because of Hillary, my daughters now take for granted that a woman can be president of the United States.”

“Don’t let someone tell you this country isn’t great — that we need to make it great again. Because, right now, this country is the greatest country on Earth.

“Between now and November, we need to do what we did eight years ago — four years ago — we need to get out there and vote. We need to pour every last ounce of our strength into electing Hillary Clinton president.”

Incredible speech by an incredible woman. Couldn’t be more proud & our country has been blessed to have her as FLOTUS. I love you, Michelle.