Homicides and other violent crime are up in many large American cities since 2015, according to mid-year figures released by the Major Cities Chiefs Association.

The figures, publicized by Republican Alabama Sen. Jeff Sessions, show an increase in every violent crime category in Los Angeles County, Las Vegas, Chicago, San Antonio and San Jose. Crime is at the forefront of the presidential race as GOP nominee Donald Trump declared at the Republican convention, “the crime and violence that today afflicts our nation will soon come to an end.” “Beginning on January 20th 2017, safety will be restored,” Trump added. 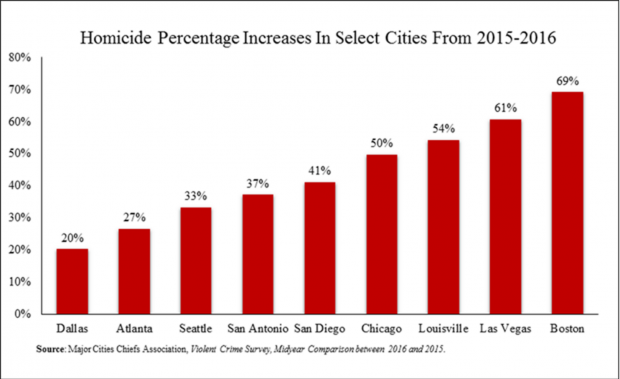 President Barack Obama responded to Trump’s speech saying, “When it comes to crime, the violent crime rate in America has been lowered during my presidency and any time in the last three, four decades.” The president did add that “it is true that we’ve seen an uptick in murders and violent crime in some cities this year.” Obama focused on the FBI figures that show violent crime is at a multi-year low.

The data from the  Major Cities Chiefs Association compared mid-year 2015 to mid-year 2016 and found that violent crime is rising in 51 reporting jurisdictions. In these 51 jurisdictions homicides have increased by an average of 15 percent nationwide compared to 2015. Robberies in the same period have increased by 2.4 percent, aggravated assaults by 2.6 percent, and non-fatal shootings by 9.5 percent.

Obama’s hometown of Chicago has not been spared by the increase of violence many major cities have seen. The figures show that Chicago’s overall violent crime rate has increased by 27 percent compared to mid-year 2015 statistics. Homicides in the Windy City have increased by 50 percent.