The average American is slowly waking up to the idea that a killer drug epidemic is rapidly growing. While common street heroin has received most of the blame, something more insidious may be emerging from the shadows.

As the demand for heroin has skyrocketed in recent years — use is up over 300 percent between 2007 and 2014 — drug dealers have started to mix heroin with newer, more potent drugs to increase their profits. The most dangerous of these new drugs is called fentanyl. Practically an urban legend at the start of the decade, fentanyl has killed thousands since 2013 when its use exploded. Now, fentanyl plays a role in the majority of opioid overdose deaths in many states like New Hampshire where 71.5 percent of all opioid deaths can be traced to fentanyl. 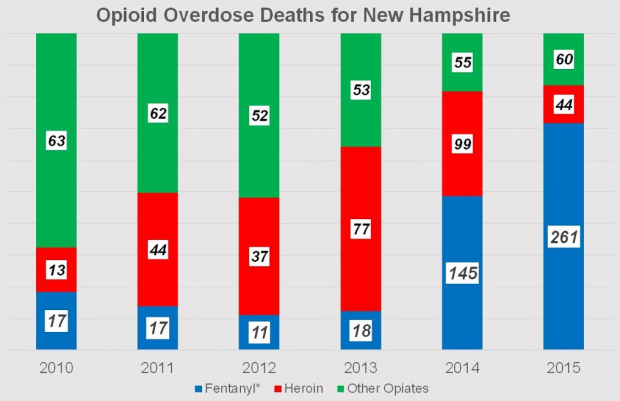 Fentanyl is a synthetic opioid that packs a punch thirty to fifty times greater than regular heroin. It is often combined with a filler substance, such as baking soda, and its traditional but less potent cousin, heroin, to reduce the necessary dose to give users a high. For example, at 50 times the strength of heroin, you could use a tenth the amount of heroin normally used if you substituted it with fentanyl while the new mixture would still be five times as strong. This mixing method, combined with the low cost of fentanyl, allows dealers to make millions in profit off a single kilogram of fentanyl.

A new report released by the DEA last week details how fentanyl is now also being sold off as prescription opioid painkillers, like Percocet and Norco, without the customers’ knowledge. Fentanyl has also been found in counterfeit Xanax pills, which is frightening because the common anti-anxiety medicine is not an opioid to begin with.

Raw fentanyl and its precursors are produced in China before being shipped to Mexico, Canada, and the United States, where regional drug dealers use industrial pill presses to make the counterfeit pharmaceuticals. 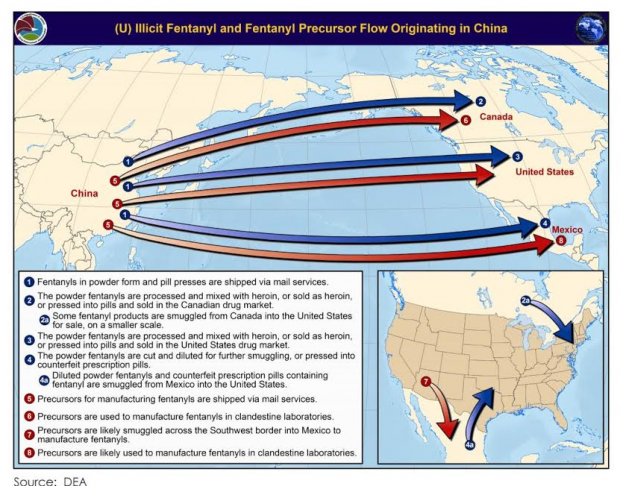 Of course, the illicit drug dealers who cook these dangerous confections are not trained pharmacists or chemists. They sometimes add too much fentanyl, making the mixture fatal. For addicts who think that they are getting their regular dose of heroin, Percocet, or even the non-opioid Xanax, the risk of overdose is high. We may not even know the scope of the problem because according to the DEA, many coroners and state crime labs don’t even test for the drug, so many fentanyl related deaths go unreported or are ascribed to other causes.

Authorities also face serious obstacles in combatting fentanyl. Since a kilogram of pure fentanyl, can produce upwards of a million counterfeit pills, a tiny quantity of pure fentanyl is almost untraceable unless authorities specifically test for it. In fact, drug dealers and producers in North America often receive the pure fentanyl from China via small packages in the mail. Furthermore, the machinery used to produce the fentanyl-laden pills is legal to produce in China and can be bought online fairly easily.

But the worst may be yet to come. Since the beginning of the year, authorities have started to confiscate even more powerful synthetic opioids, which can be mixed into drugs in such small quantities that they cannot be detected by modern blood tests.

One of these drugs, known as W-18, is believed to be 100 times more potent than fentanyl, or at least 3,000 times more powerful than street heroin. In other words, the strength differential between heroin and W-18 is more than the leap between the Hiroshima bomb and a modern thermonuclear weapon. W-18 is so dangerous in fact that it has never been legally produced outside of the University of Alberta research lab that invented it in the 1980s. In Pennsylvania and New York, the drug is a suspect in the overdose deaths of victims who could not be revived by the powerful opioid antidote.

More worrisome is the fact that many drugs including W-18 remain legal. When authorities confiscated it in a Florida drug bust, they could not charge the dealer for possessing it; the judge could only use it as an aggravating factor when sentencing him for his other crime – dealing fentanyl.

Another synthetic opioid called U-47700 has been blamed for more than 50 deaths in the United States so far this year. Affected states have stepped up to ban it but the ultimate regulator of controlled substances, the federal government, has not acted yet.

Like W-18, U-47700 has never been tested for use in humans yet foreign drug producers have managed to obtain the chemical formulas and reproduce them nevertheless. This lack of research data appears to be one reason why federal authorities are moving slowly to ban these and similar drugs; there is little official scientific justification for doing so.

In an effort to stem the tide, Sen. Chuck Grassley (R-IA) introduced a bill two weeks ago to add new substances to the federal Schedule I substance list. While the bill did include provisions banning three popular fentanyl analogs, it did not include anything about the previously mentioned drugs, W-18 and U-47700, which means that they will both remain legal in many states barring changes to the bill or unilateral action by the DEA that would declare them illegal as an emergency measure.

Although a federal ban would enable local, state, and federal authorities to tackle the problem, at the user and dealer level, the countries of origin have to root out their illicit industries to prevent future opioid deaths and the resulting street violence that comes with drug turf wars.

Until that changes, as Trump likes to say, Mexico and China “are killing us,” literally.