Numbers dropped on the third night of the Democratic National Convention, despite Barack Obama’s 49 minute speech. 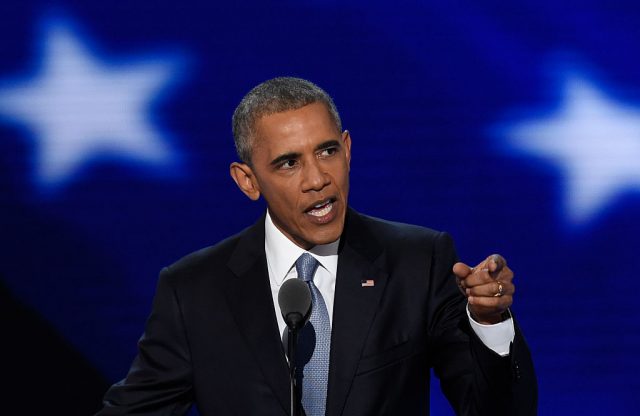 According to Deadline, an estimated 24.2 million viewers watched the president address the crowd in the Wells Fargo Center in Philadelphia Wednesday night.

Those numbers are 18 percent lower compared to the ratings Ted Cruz got when he spoke at the Republican National Convention in Cleveland last week. This is the first time the RNC coverage has outperformed the DNC.

The numbers are surprising considering Joe Biden, Tim Kaine and Obama were the speakers Wednesday. As Obama spoke, he gave a defiantly optimistic speech on behalf of the nation and Clinton.

“A lot’s happened over the years,” Obama said. “And while this nation has been tested by war and it’s been tested by recession and all manner of challenges, I stand before you again tonight, after almost two terms as your president, to tell you I am even more optimistic about the future of America than ever before.”

“How could I not be, after all that we’ve achieved together?”

“By so many measures, our country is stronger and more prosperous than it was when we started. And through every victory and every setback, I’ve insisted that change is never easy, and never quick; that we wouldn’t meet all of our challenges in one term, or one presidency, or even in one lifetime.” (RELATED: Tim Kaine Addressed The Democratic National Convention — See What He Said About Hillary)

“So tonight, I’m here to tell you that yes, we’ve still got more work to do. More work to do for every American still in need of a good job or a raise, paid leave or a decent retirement; for every child who needs a sturdier ladder out of poverty or a world-class education; for everyone who has not yet felt the progress of these past seven-and-a-half years. We need to keep making our streets safer and our criminal justice system fairer; our homeland more secure, and our world more peaceful and sustainable for the next generation.”

“The America I know is full of courage, and optimism, and ingenuity,” Obama said. “This year, in this election, I’m asking you to join me — to reject cynicism, reject fear, to summon what’s best in us.” (RELATED: What Ivanka Trump Told The Republican National Convention About Her Father)

“And there is only one candidate in this race who believes in that future, has devoted her life to it; a mother and grandmother who would do anything to help our children thrive, a leader with real plans to break down barriers and blast through glass ceilings and widen the circle of opportunity to every single American, the next president of the United States, Hillary Clinton.”

“You know, nothing truly prepares you for the demands of the Oval Office. You can read about it, you can study it. But until you’ve sat at that desk, you don’t know what it’s like to manage a global crisis or send young people to war. But Hillary’s been in the room, she’s been part of those decisions.”

“She knows what’s at stake in the decisions our government makes, what’s at stake for the working family, for the senior citizen, for the small-business owner, for the soldier, for the veteran. And even in the midst of crisis, she listens to people and she keeps her cool and she treats everybody with respect.”

“And no matter how daunting the odds, no matter how much people try to knock her down, she never, ever quits.” (RELATED: Michelle Obama Takes A Shot At ‘Make America Great Again’)