ISIS is a virtual afterthought at the Democratic convention. But disability rights were mentioned at least 35 times the first three days, according to wheelchair activist Dustin Jones.

Alas, when the cameras are not around Democrats seem mighty indifferent to this cause.  Jones, founder of United for Equal Access New York, is blasting Democrats for quietly making a special deal with Uber for convention services even though the company, “disregards our civil rights and devalues our lives by refusing to provide accessible vehicles in New York and other cities across the nation.”

In his letter to  Ohio Rep. Marcia Fudge, the convention chair, and Baltimore Mayor Stephanie Rawlings-Blake,  the DNC Secretary, Jones complained that the, “DNC accepted a deal that handed Uber a free, private lot for its vehicles outside the Wells Fargo Center in Philadelphia and gave the company inside access to transport party VIPs at the convention.”

He called on the DNC to “immediately apologize for engaging in this tone deaf and offensive business deal.”

As of early Thursday afternoon he got no response — probably because nobody from the mainstream media covered his complaint.

In a telephone interview, Jones, a Democrat, said the DNC should not do business with companies like Uber that “divide and discriminate.”

Uber has been under fire for alleged discrimination for more than a year. Jones this January filed a complaint against the company with the NYC Human Rights Commission. But it is not clear if anybody at the DNC knew about the controversy when they made a sweetheart deal with Uber. In return for the special access Uber is reportedly giving convention VIPs free rides.

Unlike many “rights” activists, Jones,  who is largely confined to a wheelchair because of problems with his legs, actually wants equal treatment not special privileges.

Transgendered “women” who still have male plumbing are perfectly capable of using the men’s bathroom; gays can easily find non-religious bakers to make them wedding cakes. But most people confined to a wheelchair can not get into an Uber SUV unless it is fitted with a special ramp.

“We work and travel just like everybody else [but] I don’t have the option to ride Uber,” he says.

Uber did not answer emailed inquiries. But previously responded to criticism by saying its app lets users arrange for pick-ups by New York City cabs that are wheelchair accessible.

DNC Interim Chair Donna Brazile, who once quietly and courageously praised Clarence Thomas as a good role model for blacks but these days won’t touch anything messy unless it gets mainstream coverage, initially promised to get a response from an aide for the Washington Gadfly by tomorrow afternoon.

She is clearly not a liberal in a hurry.

Worse yet, when the Democratic press office was told, with Brazile cced, about her stated wishes, she replied, “I’m not the Chair of the Party so I cannot command anyone to respond.”

Sorry for the confusion, Donna.

How foolish of me to think a presumably twenty-something press aide would take cues from the interim chair who has been a party fixture for decades!  Or, even more bizarre, that you would want to comment directly.

Enjoy your free Uber ride home tonight — just don’t ask disability rights activist Anastasia Somoza, who  addressed the convention on the ISIS-free Day 1 from her wheelchair and trashed Donald Trump for insensitivity, to join you. 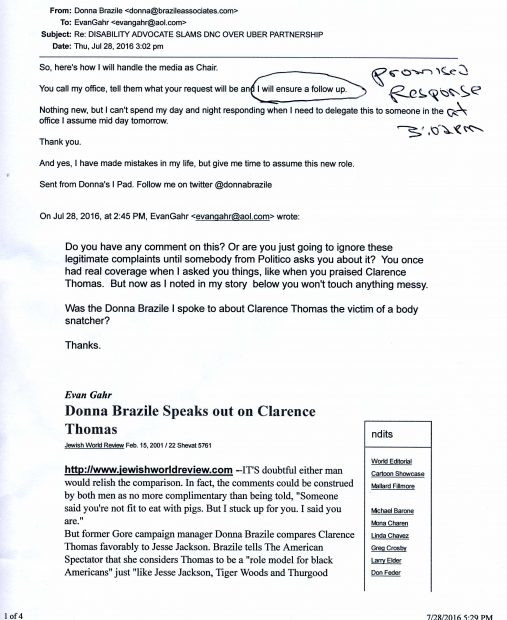 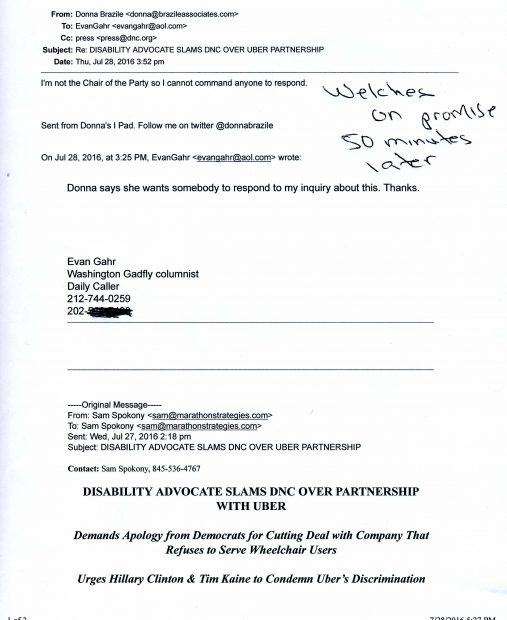