Home defense is one of the most common reasons for buying a gun. Home invasions are rare, but if you do become the victim of one a firearm is a powerful equalizer. Used properly it can cancel out superior numbers or greater physical strength, and let you handle an assault that, unarmed, you’d have been overwhelmed by.

Any gun is better than nothing, but if you’re buying one specifically for home defense you can increase your edge by picking the right one for the job. Unfortunately this is one of the most controversial subjects in the whole shooting world; you’ll quickly find yourself in a maze of conflicting opinions about the idea defense weapon, and a lot of people end up making the wrong choice because they couldn’t filter out the good advice from the bad.

When you’re choosing a home defense weapon it’s always a good idea to start by looking at the characteristics you want – and the ones you don’t want. Too many popular choices are loaded down with the second kind, reducing their effectiveness and even endangering the people you want to protect. Here are the key features you’re looking for:

Think about likely scenarios when you need to use a gun for home defense. If it happens it’s usually going to be at night – often when you’ve just been woken by the sound of intruders forcing their way in. You won’t be fully up to speed, and you’ll also be pumped up on adrenaline. You need a gun that’s simple to operate and safe to handle even when you’re in a hurry.

Ammunition capacity. This has to be adequate, because you don’t want to be reloading under pressure if you can help it. On the other hand don’t go for magazine size if that means compromising other features. Six rounds is the bare minimum to handle a single assailant.

Easy handling. Home defense is the ultimate in urban combat. You’ll be working in a confined space, so long weapons are at an immediate disadvantage – they’re harder to maneuver and more likely to get caught on curtains or furniture. They’re also easier for an assailant to get hold of, and once someone’s grabbed the barrel they can use it as a lever to get control of the weapon.

Quick aiming. Ideally you’ll be able to handle the situation without firing a shot. If you do have to shoot it’s going to be at very close range – often just a couple of feet. Precise marksmanship is not your goal here; the aim is to rapidly put rounds into somebody’s center of mass. Optical sights just get in the way and are a really bad idea. You want open sights – ideally illuminated with tritium – or, even better, an aiming rib on the barrel. Lasers and boresighted streamlights are also good – inside the home a streamlight is a better option, because it also gives you illumination and it’s good enough for aiming at the ranges you need.

Low penetration. Excessive penetration is a serious liability in a home defense scenario. If you miss a shot, or a round goes clean through the intruder, the last thing you want is for it to carry on through a door or internal wall. Your family will be in your home with you, and could end up in the path of anything that penetrates the structure.

So that’s what you’re looking for in a weapon. You now have three ways to deliver it: A handgun, rifle or shotgun. They all have strengths and weaknesses, although one of them is way out in front when it comes to home defense. Once you’ve decided which suits you best you could do a lot worse than go for one of the three weapons listed here.

Handguns aren’t ideal for home defense; close quarter combat with a pistol is not easy, and they’re also the least safe firearms to have around. They do have strong points though. If you’re short of space a handgun will take up a lot less room than a shoulder weapon. They’re also good if you have kids around – a pistol is easy to keep locked up out of the way, but if you get a good pistol safe with a keypad you can still have it out and ready to use in a matter of seconds.

The Glock 17 is now one of the most popular handguns among police forces worldwide, and is making ground in the military market too. It’s well made, handles well and has a massive 17-round magazine capacity. It fires the punchy 9mm Luger round; for home defense load it with hollowpoints to cut the risk of over penetration. Some argue for larger calibers but the fact is the 9mm has all the power you need, and it packs in more rounds for the same size of weapon.

Out of the box the Glock 17 doesn’t have a conventional safety catch. It has three separate internal safeties that prevent it firing if dropped, and a bar on the front of the trigger blocks the mechanism unless you actually have your finger on the trigger applying pressure. After market thumb safeties are also available, but it’s a pretty safe gun anyway.

A big advantage of the Glock is its ergonomics, which make it very controllable in rapid shooting despite it slight weight. The key to ending a home defense scenario is to put multiple rounds into the intruder’s torso as rapidly as possible, and the highly controllable Glock maximizes your chance of doing that. It also has an integrated accessory rail for a laser module or tactical light, and the stock sights are combat-style with white visibility marks.

Rifles really aren’t great for home defense. In general they’re easily the least suitable guns. They’re long, not designed for close quarter shooting and they have a tendency to massively over-penetrate against doors and internal walls. So why would you consider a rifle at all? Simple – rifles are versatile. If you only have the budget, space or inclination to own one gun, and you plan on using it for target shooting or varmint control as well as home defense, a rifle could be the best choice.

One of the most popular 22 rifles in the USA is Ruger’s 10/22; more than five million have been made since it first went on sale in 1964. It makes an ideal rifle for plinking, small game or pest control, but it’s also a useful home defense weapon. Its .22 Long Rifle caliber is low-powered, which minimizes the penetration hazard. Rifles in high-velocity chamberings like .223 are totally unsuitable for home defense – their high velocity rounds are a serious hazard indoors. On the other hand a .22 hollowpoint is pretty much guaranteed to stop inside the target, its low recoil means you can rapidly deliver half a dozen of them, and if you do miss the little bullet is carrying a lot less energy with it. 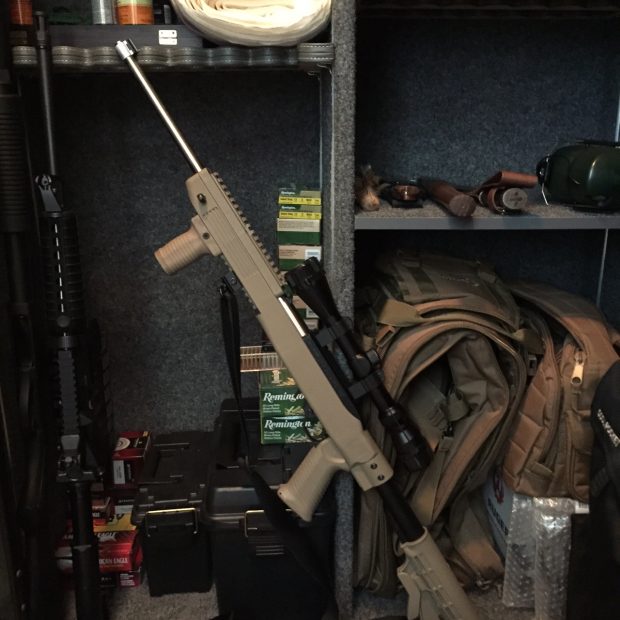 The standard 10/22 is a conventional sporting rifle, but there’s a huge array of after-market accessories available. To create a home defense gun fit a folding stock and replace the standard barrel with a carbine-length one (this is easily done at home – it doesn’t need gunsmithing tools). An option is Ruger’s own SR-22, which is a 10/22 carbine in an AR15-style chassis; it comes with a 16-inch barrel and telescoping stock. Add a laser or tactical light, buy a 25-round box magazine and you have a lightweight and handy rifle that’s great fun to shoot – but will also do better for home defense than most rifles.

The ultimate home defense weapon is a pump-action shotgun. It’s built for quick aim at close-in targets, and it packs enough wallop to stop an intruder in their tracks while keeping penetration to the minimum required. It can even be used as a psychological weapon; the sound of the slide being racked to chamber a round will make a lot of bad guys turn and run before you even see them.

There’s a huge range of pump guns available, but you won’t go wrong with a Remington 870. This is the best-selling shotgun in history, and the favorite door knocker of law enforcement and militaries worldwide; it’s solid, reliable and reasonably priced. There are more sophisticated shotguns available but few that can rival the Remington 870 for dependability. It also has a huge range of options. For home defense a folding stock and 18-inch barrel is ideal. With 2¾-inch shells loaded with #4 buckshot that should give you five rounds to play with, and aftermarket lights are available to help with aiming. 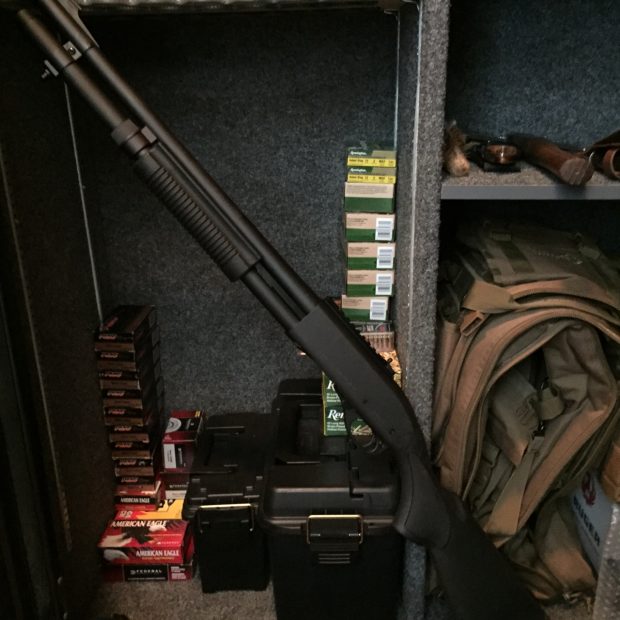 A folding-stock 870 is easy to maneuver in confined spaces, simple to operate, very intimidating and devastatingly effective. It’s a simple, classic design and it’s still the perfect weapon for keeping you, your family and your home safe.

Overall, there are many options that you may have when picking a weapon for home defense, and while our favorite may be the Remington 870, the most appropriate firearm is the one you have next to you when something bad happens.

It’s also important to make sure that you keep your gun locked up safely and securely, especially if you have children in the house.  It’s your responsibility to ensure that your firearm is accessible in case of emergency yet fully secured to prevent any unintended mishaps.  ProjectChildsafe.org is a great resource for those looking for more information on responsible firearm ownership and will walk you through the basics of keeping a firearm secured if you are looking for your first home defense weapon.

Jason Wilson is a frequent contributor at WildernessToday.com.  He is an outdoor enthusiast that enjoys all things related to hunting, fishing, shooting and wilderness survival.  Jason spends his most of his outdoor recreation time in areas of Northern Arizona and frequents the lakes in Minnesota during the summer when he’s not spending time with his wife and four kids.